The questions over South Africa’s best top three will be ongoing though as Quinton de Kock, Aiden Markram and Temba Bavuma all fell cheaply. 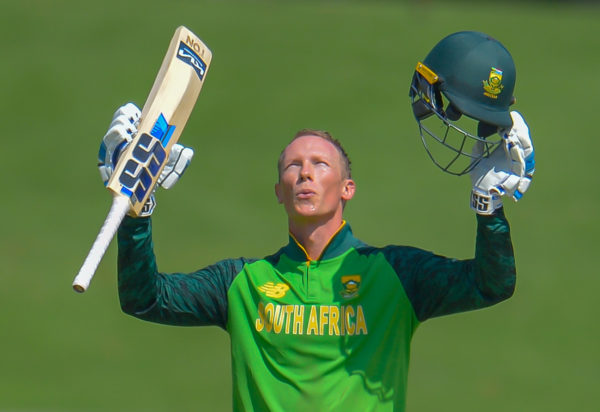 Rassie van der Dussen will long remember April 2 as the day he made his first international century but the Proteas bowling attack will need to be at their best if they are to ensure the reliable batsman can also celebrate being on the winning side in the first ODI against Pakistan at SuperSport Park in Centurion on Friday.

Van der Dussen’s superb 123 not out off 134 balls lifted South Africa to 273 for six after they were sent in to bat and it was a tremendously determined innings by the 32-year-old.

Van der Dussen had passed 50 in seven of his 16 ODI innings before Friday, but had a highest score of 95. His highest Test score is 98 and he has a T20 International best of 74 not out.

The phlegmatic right-hander reiterated that he is the man for a crisis as he lifted the Proteas from 55 for four, the home batsmen struggling against excellent Pakistan seam bowling on a tacky pitch that gave them plenty of assistance. Van der Dussen kept composed, was disciplined in his shot-selection, but also showed great placement when he capitalised on loose deliveries.

The questions over South Africa’s best top three will be ongoing, however, as Quinton de Kock (18) sliced a catch to a wide mid-off, Aiden Markram (19) played too early and was caught in a similar position, and new captain Temba Bavuma (1) threw his wicket away by steering an uppercut straight to deep backward point.

Heinrich Klaasen struggled to 1 off 21 balls before being caught behind off a loose drive, but the tide turned when David Miller came to the crease. The veteran left-hander matched Van der Dussen for calmness, playing beautifully through the off-side as he scored 50 off 56 balls and added 116 off 135 deliveries for the fifth wicket with the Pretoria-born player.

Andile Phehlukwayo will also be pleased with his contribution as he scored a valuable 29 and added another 64, at a run-a-ball, for the seventh wicket with Van der Dussen.

The Pakistan pace bowlers were the chief threat – which will encourage South Africa’s three fast men – with Faheem Ashraf leading the way with one for 25 in nine impressive overs. Mohammad Hasnain took one for 52 in his full quota of 10 overs, while left-armer Shaheen Shah Afridi removed the openers and finished with two for 61.