The South Africans were able to defend only 145 against Afghanistan in Abu Dhabi ahead of the T20 World Cup. 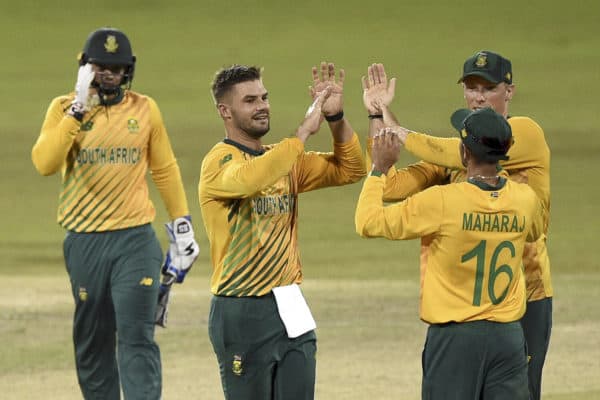 Any lingering worries that South Africa’s bowling attack might not be as effective in Abu Dhabi were blown away on Monday as the Proteas defended a total of just 145-5 in beating Afghanistan by 41 runs in their T20 World Cup warm-up match.

An outstanding all-round bowling effort saw Afghanistan restricted to 104-8 in their 20 overs as South Africa bowled with tremendous control and a clear plan.

Slow left-armer Bjorn Fortuin (4-1-12-1) and paceman Lungi Ngidi (4-0-27-2) set the tone up front as they dismissed both openers for ducks, and then spinners Keshav Maharaj (4-0-14-1) and Tabraiz Shamsi both struck in their first overs as Afghanistan struggled to 42 for five.

Seamer Dwaine Pretorius also chipped in with a wicket and did a good job in the middle overs, sticking to his strengths.

Shamsi, the No 1 bowler in the world in this format, had no mercy on the rest of the batting line-up as he finished with three for 18 in his four overs.

South Africa had won the toss and elected to bat first, but were off to a torrid start against spin.

Quinton de Kock fell for 7 to impressive off-spinner Mujeeb-ur-Rahman (4-1-24-3) and a rusty Temba Bavuma struggled in his first competitive knock since September 2 after suffering a broken thumb in Sri Lanka.

Bavuma only scored two runs off his first 13 balls, but then picked up the pace to make 31 off 39 deliveries.

South Africa only posted 26 runs in the powerplay, and such a slow start normally damages a team’s prospects irretrievably.

But Aiden Markram played a skilful innings on a slow pitch, his 48 off 35 balls injecting some urgency and being the mainstay of the batting effort.

Rassie van der Dussen (21) and Heinrich Klaasen (11) both scored at well over a run-a-ball and David Miller provided an explosive finish with 20 not out off 10 deliveries.