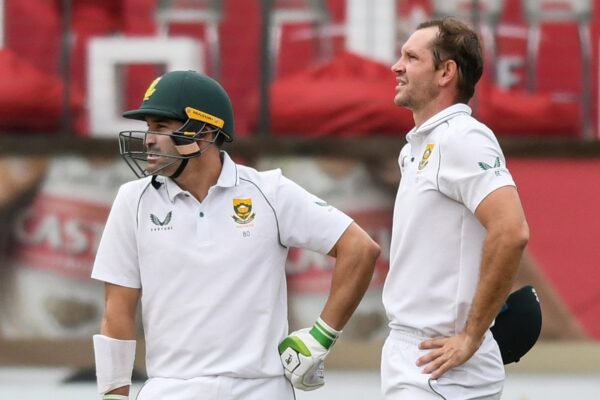 The Test series against Bangladesh has shown that the Proteas have discovered two new partnerships that they did not have at the start of the summer, as spinners Keshav Maharaj and Simon Harmer continue to cause havoc and Sarel Erwee combines superbly with Dean Elgar in the new opening batting partnership.

Maharaj and Harmer took three wickets in three overs after lunch on Sunday to rush Bangladesh’s first innings to a close on 217 all out, a deficit of 236, and the pair were at it again in the 9.1 overs before stumps as they reduced Bangladesh to 27/3 in their second innings at St George’s Park.

The tourists were chasing a highly unlikely 413 for victory, with South Africa having declared their second innings on 176/6 after batting for less than 40 overs. That was partly due to the tone set up front by Erwee (41) and Elgar (26), who put on 60 for the first wicket off just 69 balls.

“As opening batsmen, your heart flutters when you have to come out and bat at twilight,” Erwee said.

“It’s not a nice period and it’s even worse when you have to face two world-class spinners like Kesh and Simon.

“They are very experienced campaigners, they know their craft and they have different variations and speeds. Plus they have bowled in different conditions around the world.

“They are a partnership which will stand South Africa in good stead.

“As far as Dean and I go, we share a good relationship off the field and we know what makes each other tick, which allows you to understand your partner a bit better. Things are going quite well at the moment for us.”

The strapping left-hander said it had always been South Africa’s plan to bat aggressively and hit the 400 mark in terms of a lead before declaring.

“We had the target of a minimum 400-run lead, that’s what we were looking at before declaring. It was always the plan and that’s why there was such positive shot-making,” Erwee said.

“In terms of our mindset, we want to be positive. That’s what Dean as captain and coach Mark Boucher are trying to instill, and we’ve got to follow through as players.”