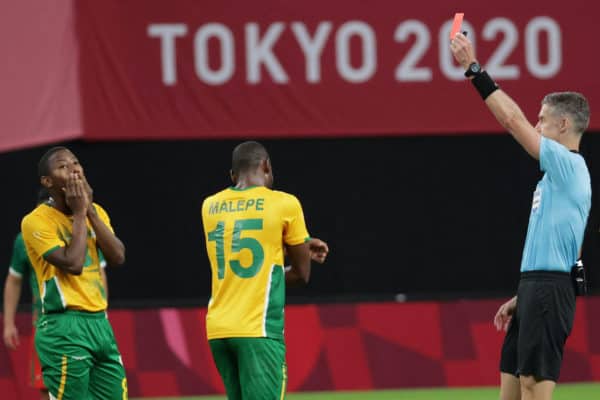 South Africa will fly home from Tokyo 2020 without a point in the men’s football tournament, after they were thumped 3-0 by Mexico in their final Group A match on Wednesday afternoon.

David Notoane’s side lost 1-0 to Japan in their opening match and were then beaten 4-3 by France, before Mexico took them apart at the Sapporo Dome.

South Africa went into the game with only a slim chance of making it to the quarterfinals, needing to beat Mexico by three clear goals and hope that Japan beat France in Wednesday’s other Group A match.

In the end, Japan did hand France a 4-0 battering, but South Africa were nowhere near completing their part of the equation in a performance that also saw their captain Tercious Malepe sent off in the second half for a poor challenge.

South Africa were already 2-0 down by the time Malepe was dismissed, following a VAR review, and soon after striker Henry Martin, who tormented Notoane’s men throughout, added a third goal. Mexico then had Carlos Rodriguez sent off after he brought down Luther Singh when clear on goal, but it mattered little, except that Rodriguez will miss the quarterfinal.

A fairly even first 15 minutes or so saw both sides battle to create clear chances, before Mexico cut through the South African defence on the break with worrying ease.

Martin started a superb passing move move that saw Alexis Vega with the easiest of tap-ins at the back post to put Mexico in front.

And the Central American side doubled their lead on the stroke of half time as a poor back header allowed in Luis Romo, and while his finish was a little fortunate, it was no less than Mexico deserved.

Martin, one of Mexico’s overage players at the tournament, then added a third after the break as they finish second to hosts Japan in Group A. Mexico will now play South Korea in the quarterfinals on Saturday. South Africa will fly home, and have still only recorded one win in three appearances at Olympic men’s football tournaments.

That was quite the victory – a 3-1 win over Brazil at Sydney 2000 – but even then South Africa failed to make it out of the group stages.