Fraser-Pryce and Felix feature on day one of Olympic athletics

Some exciting track races are on the cards. 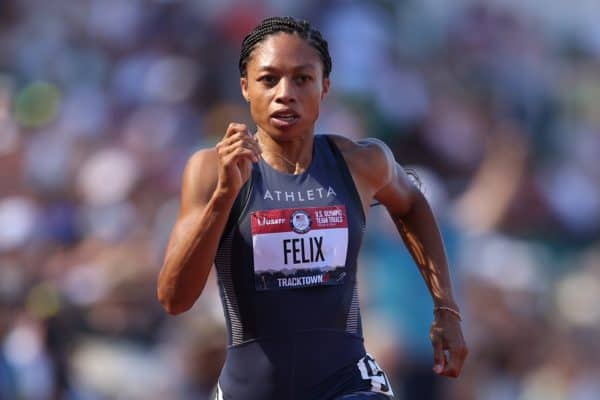 Allyson Felix is competing at her fifth Olympics and will be in action in the missed 4x400m relay. Picture: Getty Images

The opening day of athletics at the 2020 Tokyo Games will take place at the Olympic Stadium on Friday. AFP Sport looks at five stand-out events:

The only final on the opening day of track and field will see a new champion for the first time since 2012 in the absence of two-time defending champion Mo Farah.

Star quality in the 25-lap race in Tokyo comes in the shape of two Ugandans: world record-holder Joshua Cheptegei and world-leader Jacob Kiplimo.

Commonwealth champion Cheptegei, who finished sixth in the event in Rio before winning world silver in 2017 and gold in 2019, and Kiplimo are both aiming for the 5,000m-10,000m double in Tokyo.

Shelly-Ann Fraser-Pryce clocked 10.63sec to become the second-fastest 100m sprinter of all time in June.

The 34-year-old Jamaican is now aiming to become the first woman to win a single individual Olympic athletics event three times, to add to the 100m victories she claimed in 2008 and 2012.

Second-quickest this year is Fraser-Pryce’s compatriot Elaine Thompson-Herah, the defending champion in both the 100 and 200m.

Fraser-Pryce will also be under pressure from Blessing Okagbare, who ran a wind-assisted 10.63sec to win the Nigerian trials, and Britain’s Dina Asher-Smith, who won the world 200m title and also claimed silver in the 100m and 4x100m in Doha.

One of the headline events of the Olympic track events, given that it will pitch Norwegian Karsten Warholm againt American rival Rai Benjamin.

Benjamin ran 46.83sec when winning the US trials, but not to be outdone, Warholm, at his home meet in Oslo and in his favoured lane seven, then ran 46.70sec to break Kevin Young’s world record set at the 1992 Barcelona Olympics.

Warholm held off Benjamin in a thrilling duel at the 2019 world championships in Doha, and the rivalry between the pair should guarantee a spectacle.

Sifan Hassan will kick off her audacious treble bid when she takes to the track for heats in the 5,000m.

The Ethiopian-born Dutchwoman is targeting not just the 5,000m, but also the 1500 and 10,000m in an unprecedented tilt at middle-distance dominance.

Hassan became the first athlete to achieve the 1500 and 10,000m world double in Doha in 2019, an astonishing display given that it coincided with a four-year ban handed down to her then coach Alberto Salazar, the head of the now-disbanded Nike-funded Oregon Project.

The 5,000m could prove to be Hassan’s toughest event: in Gudaf Tsegay, Ejgayehu Taye, Senbere Teferi, Hellen Obiri and Agnes Tirop, the Tokyo entry list features five of the world’s 10 fastest ever over the distance.

There will be no Letesenbet Gidey, however, the Ethiopian world record holder focusing instead on the 10,000m, in which she also has the world record, snatched two days after Hassan had set a new mark.

A potential hurdle for Hassan is that the 5,000m final comes on August 2, following heats for the 1500m earlier that day.

The mixed relay makes its Olympic debut having previously appeared at the 2019 world championships, where a US quartet featuring veteran Allyson Felix won gold.

The 35-year-old elder stateswoman of US track and field brings the curtain down on her 17-year Olympic career in Tokyo.

In her fifth and final Olympics, Felix is bidding to become the most decorated female track and field athlete in Games history.

She is currently tied with Jamaican legend Merlene Ottey with nine medals, a dazzling haul that includes six golds and three silvers.

One more medal in Tokyo — virtually guaranteed given her place in the dominant US women’s 4x400m relay squad — will see her pull clear of Ottey. If she wins two or more, she will overtake Carl Lewis as the most decorated American track athlete in history.