Matthew Sates was fifth in his 100m butterfly heat, and he too was eliminated. 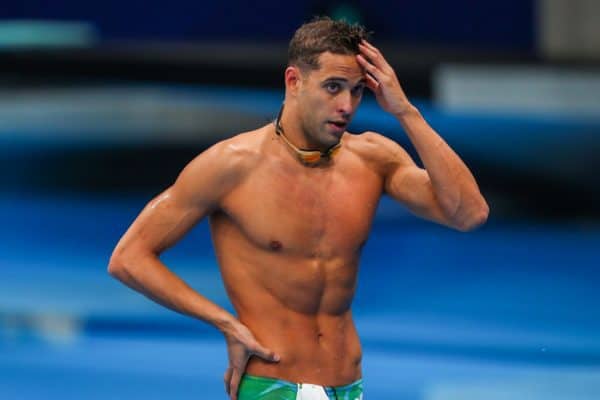 Chad le Clos of South Africa has lost out on a chance of racing in the 100m butterfly final, bringing an end to his Tokyo Olympics. Picture: Roger Sedres/Gallo Images

Chad le Clos crashed out of the Tokyo Olympics on Thursday, with his campaign halted in the opening round of the men’s 100m butterfly.

The four-time Olympic medallist, competing at his third Games, finished sixth in his first-round heat in 51.89.

Well off the pace of American Caeleb Dressel, who was fastest in 50.39, the 29-year-old South African settled for 18th place overall, with only the top 16 qualifying for the semifinals.

He had been aiming for his third successive medal in the 100m fly.

It is doubtful Le Clos, South Africa’s most decorated Olympian, will be back to compete at another Games. The Paris Olympics is just three years away, in 2024, but the butterfly specialist will then be 32.

Fellow South African, 18-year-old Matthew Sates, was fifth in his heat in 52.34, and he too was eliminated.

On the golf course, Christiaan Bezuidenhout fired a first-round 68 to settle in a tie for 12th place at three-under-par in the men’s tournament.

He was five shots behind Austrian leader Sepp Straka, who was eight-under (68) with three rounds remaining.

Garrick Hugo, the other South African in the field, was tied for 41st position on level par (71) after his round was disrupted by poor weather conditions.

Elsewhere in the morning session on day six of the Games, the SA men’s hockey team kept their playoff hopes alive with a stunning victory over Germany.

Mustaphaa Cassiem, Keenan Horne, Matthew Guise-Brown and Nicholas Spooner all scored for South Africa as they secured a 4-3 win over the Germans, who have stepped on the podium at the last four editions of the Olympics.

While the SA men can still progress to the quarter-finals, they will need to improve their goal difference by crushing Canada in their last group match on Friday to have any chance of reaching the last eight.