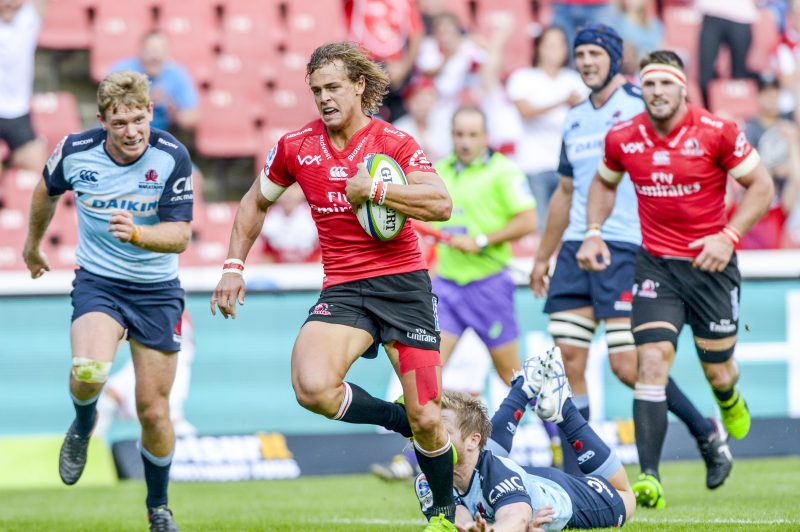 A guy like Andries Coetzee won't be left at home again for the Lions' trip to Argentina. Photo: Sydney Seshibedi/Gallo Images.

The Lions confirmed their status again as perhaps South Africa’s leading side in Super Rugby with fine attacking performance against the Waratahs on Saturday.

However, much of their credentials will be tested next weekend when they play the Jaguares in Buenos Aires.

And they’ll know how tough that might be after the Argentinians came close to upsetting the Stormers at Newlands.

As those two leading sides try to continue their decent form, the Sharks and Cheetahs have platforms to build on.

Even the Kings will be smiling.

Johan Ackermann, the Lions’ coach, confirmed he’ll send a full-strength side to Argentina as his troops look to capitalise on a good start to the campaign.

The team’s brains trust controversially sent a B-side over in last season’s tournament to preserve the first-choicers fitness.

“The people will think I’m crazy if I don’t take the best side,” said Ackermann after a 55-36 win over the Waratahs.

“I did think about it but it is too soon in the competition. We haven’t built up momentum yet.”

The Lions though will make the trip without Rohan Janse van Rensburg, who’s been granted compassionate leave following the death of his mother.

“We’ll let him have his moment with his family. We have to trust the rest of the squad,” said Ackermann.

Robbie Fleck’s Capetonians weren’t particularly convincing during their 32-25 win at Newlands over the Jaguares.

The concerning part about that is they play New Zealand sides this year, who will likely play with even more intensity.

The last thing then the Stormers needed before those trials are “easier” matches.

“That was probably the best line speed we faced this year and that is how the Hurricanes and the Chiefs play,” said Fleck.

“That’s why it was a very good test for us. After the Kings and Sunwolves, we’ve got six games on the trot where we are playing teams like the Lions, Chiefs and Crusaders.”

However, that shouldn’t discourage the Stormers.

In fact, it’s rather an opportunity to further improve on a squad that looks promising.

The biggest problem the Central franchise (and their supporters) can make is to think Currie Cup success automatically translates into better Super Rugby results.

The Currie Cup is far too watered down nowadays for that to be the case.

Therefore it’s pleasing that coach Franco Smith is not getting overexcited by a fine 34-28 win over the Bulls.

“We’ve just won one game and won’t change much because there’s nothing we’ve achieved. The win took a very big effort and there will be big efforts every week until we’ve matured as a team.”

If they need further confirmation, they need not look further than the Bulls.

Currie Cup success hasn’t helped the men from Pretoria much.

Sharks look boring but they’re the most balanced

Everybody wants to see attacking rugby.

But as the Lions, Cheetahs and Bulls showed, running rugby leads to other fundamentals being neglected.

Against ruthless opposition, that can have dire consequences.

Robert du Preez’s men did really well in Canberra, calmly erasing a 3-15 deficit against the Brumbies by doing the basics well.

“After last week, we wanted to created more of the play,” said flyhalf and captain Pat Lambie.

“We did that and even enjoyed more territory as well though we couldn’t quite finish the Brumbies off.”

The Sharks also emphasised an important truth with their last-gasp winning try – you don’t have to play attacking rugby constantly.

Sometimes all you need is one moment of brilliance, like the Curwin Bosch-inspired try for Lukhanyo Am.