Shaky Stormers go back to basics to beat Sunwolves

Robbie Fleck's men get an almighty scare before the bench and some more conservative tactics prove enough to see them through. 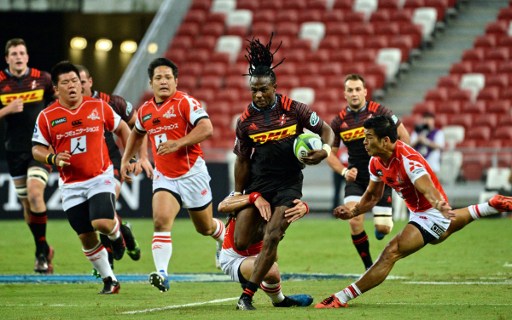 The Stormers appeared very shaky at first before relying heavily on their forward pack in order to retain their unbeaten Super Rugby record with a hard-fought but unconvincing 44-31 over the Sunwolves on Saturday in Singapore.

It took a 76th minute try by hooker Bongi Mbonambi to finally put an end to the Sunwolves brave effort after the home team threatened to run riot in the first half with their high-tempo approach.

And just to put a cherry on top, wing Bjorn Basson scored the sixth on the stroke of full-time but the final scoreline doesn’t testify how much flaws in the Stormers game were exposed.

There were two crucial moments in the final quarter with Stormers prop Oli Kebble first getting a yellow card for a neck tackle on Sunwolves wing Kenki Fukuoaka with just 15 minutes left in the game and the visitors leading just 34-31.

But then flyhalf Jumpei Ogura missed a simple penalty in front of the posts, ironically his first miss after kicking his previous five attempts which could have tied the scores.

The Sunwolves initially held their own in the set-pieces before they ran out of steam while their eagerness to apply a high tempo to their game had the Stormers scrambling on defence.

Even speedster on the wing Seabelo Senatla, who funnily enough caught more the eye with his defence, was well watched.

The visitors would have been a worried bunch with the home team holding a deserved halftime lead of 24-20 and then alarmingly stretched their advantage to 31-20 three minutes after the break following their fourth try and the second by centre Derek Carpenter.

The Stormers however then had little choice to make the game more tight and slow the home team’s dangerous runners down resulting in their third try by prop Wilco Louw to reduce the lead to 31-27 with just 28 minutes left of the action.

The visitors finally got their nose in front in the 62th minute after some strong running by Stormers flyhalf Robert du Preez created the gap for scrumhalf Deawaldt Duvenhage to dive over for a narrow lead of 34-31.

The Stormers problems in the first half started not only because of poor organisation on defence, but the Sunwolves managed to create space at will which formed the foundation of their three thrilling tries inside the opening 30 minutes.

Their cause was also not helped with the yellow card to flank Rynhardt Elstadt in the sixth minute after he executed a no-arms shoulder charge on the Sunwolves No 8 Willie Britz’s knee in the build-up to the hometeam’s first try by Carpenter.

Two more tries by the Sunwolves’ wing Shota Emi and lock Liaki Moli ensured a lead of 24-10 by the 25th minute with the Stormers hitting back with two tries by centre EW Viljoen and Elstadt.

Dillyn Leyds was influential on fullback in the buildup to the one-hand pick up of Viljoen’s try, while Elstadt forced his way over from close range.