The red hot Varsity Cup performer suddenly emerges as a candidate for Super Rugby if the men from Ellis Park's centre crisis deepens. 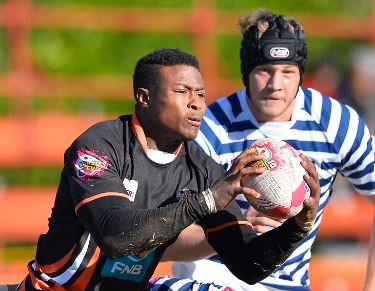 On Monday evening, Aphiwe Dyantyi received the honour of being included in the Varsity Cup Dream Team, who’ll play the Junior Springboks next week.

But if the Lions’ injury crisis in the midfield deepens, the influential centre of the University of Johannesburg (UJ) could find himself in a bigger spotlight.

Also read: WATCH: There’s a loud roar in our Super Rugby XV of the week

While they’re not panicking, Lions coach Johan Ackermann on Tuesday admitted the side is starting to feel the pinch in terms of depth.

The expected absence of Rohan Janse van Rensburg, who injured his knee at the weekend against the Stormers, means only three senior centres are left.

“We’re not in trouble but we are a bit concerned,” said Ackermann.

“Last year we had a full group of centres who played all year round. Suddenly we don’t have Howard Mnisi or Rohan. Harold Vorster and Lionel Mapoe performed superbly in the Cape and Jacques Nel is still on the fringes.

“But it’s now a case of hoping our three senior midfielders keep healthy and stay in form.”

Unlike the Stormers, who recruited New Zealander Shaun Treeby to relieve their centre crisis, the Lions will place faith in their rookies.

And that’s where the 22-year-old  Dyantyi suddenly comes in.

“If we suffer another setback, we’re going to have to use the younger guys,” said Ackermann.

“One of them is Aphiwe. He’s had an excellent Varisty Cup campaign and his switch to centre has been really successful.”

Others that could get a look in should the need arise are Gerdus van der Walt – younger brother of injured fullback Jaco – and Jan-Louis le Grange.

For now though, with the Jaguares looming at Ellis Park on Friday evening, Ackermann is optimistic.

“Harold really chose the best time to deliver a great performance and seems to be back to his old self,” he said.

“He combines well with Lionel, so we’re hoping they have an opportunity to gel further.”