Johan Ackermann's troops produce a stirring second half revival against a Hurricanes side that started to choke on the Highveld air. 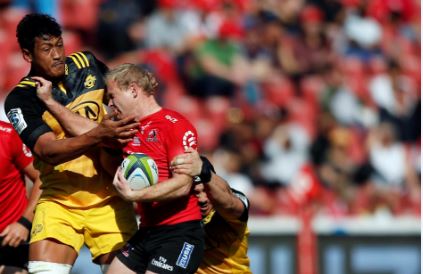 After pretty much being outplayed in the first half and trailing 22-3 after 37 minutes, Johannesburg’s Pride staged the bravest of comebacks in their semifinal against the Hurricanes at Ellis Park on Saturday.

In fact, they delivered such a compelling performance that they secured an emphatic 44-29 win to secure a first-ever Super Rugby final at home.

They will now meet the Crusaders in the showpiece, who beat the Chiefs earlier in the day 27-13.

The Lions must be praised for overcoming some unsporting and spoiling tactics by the visitors in the first half to take matters in their own hands.

They started playing in the right areas of the field and cut down on their errors.

It all started going pear-shape for the visitors when their match-winner flyhalf Beauden Barrett was yellow carded in the 58th minute with the home team trailing 22-29 when he killed the ball on the deck when it looked like Lions wing Ruan Combrinck was well on his way of scoring a certain try.

Who was the star of this game?

It’s so difficult to name the most influential player as it required a team effort from the Lions to fight their way back into the game.

There were huge efforts from the entire team, with flankers Jaco Kriel and Kwagga Smith superb, but let’s be brave and give it to Lions flyhalf Elton Jantjies who was brilliant after being written off just a week ago.