The embattled Springbok coach says his troops 'didn't lack effort' after they slumped to a record defeat against Ireland. 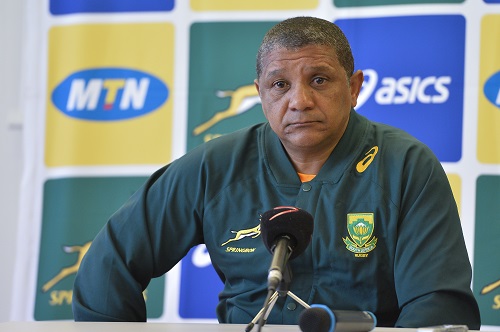 Embattled Springbok coach Allister Coetzee fiercely defended his misfiring team upon their arrival in Paris yesterday in the aftermath of their record 38-3 defeat at the hands of Ireland on Saturday.

The Boks were dealt even more bad news ahead of their Test against France yesterday with the news that Pieter-Steph du Toit, one of a few players who managed to keep their reputation intact in Dublin, is concussed and will not be considered. Toulon No 8 Duane Vermeulen, who was called up yesterday to replace injured prop Coenie Oosthuizen, is likely to replace Du Toit at No 8.

It is believed Coetzee would again face a review next month by SA Rugby’s executive committee similar to last year, only this time he is unlikely to survive the axe.

The Boks have failed to win one of their last five Tests and calls for Coetzee’s head are getting more vocal by the day.

“To just say there’s a lack of effort is awful, it’s also not true,” Coetzee said.

“The crux of the matter is we were ill-disciplined. We didn’t realise penalties would hurt you so much and the three points in the northern hemisphere is almost like a score (try).

“We’ve got to make sure our discipline is intact.”

He is also expecting a big backlash from France, who suffered a whitewash in South Africa in June, and held their own for big portions of their 38-18 loss to the All Blacks at the weekend.

There might also be an added incentive for France to beat the Boks should South Africa be awarded the rights to host the 2023 Rugby World Cup on Wednesday.

“We’ve got to prepare for a much improved French side and that’s the bottom line,” Coetzee cautioned.

“There are certain things you have to be good at: they’ve got a good, powerful scrum, a good maul and we must make sure we can deal with that.”

Vermeulen played the last of his 37 Tests in the first Test against Ireland in Cape Town last June before having his fair share of injuries.

He missed this year’s series against the French due to a shoulder problem and was then ruled out of the Rugby Championship after groin surgery.

It is not clear yet if Du Toit will be available for the last two Tests on tour against Italy and Wales.

The team to play against France at the Stade France will be confirmed on Thursday.

The Springboks need Duane Vermeulen to save them