Elton Jantjies ready to help out the Lions’ new skip

Franco Mostert was almost unexpectedly handed the stand-in captaincy but the Bok flyhalf is ready to help out with some leadership. 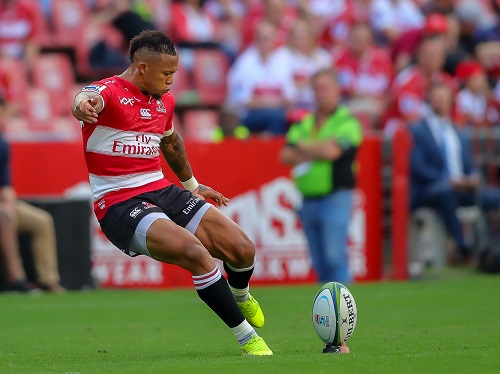 Experienced Lions flyhalf Elton Jantjies believes the team could face a different kind of Super Rugby challenge after the injury of their inspirational captain Warren Whiteley.

Flank Franco Mostert takes over the leadership in this afternoon’s clash against the Sunwolves at Ellis Park, with a tough away match against the Jaguares and a home game against the Crusaders to follow.

“Wazza is always a great loss on the way he leads the side,” said Jantjies after Whiteley was ruled out for four weeks with a knee injury.

“His work ethic on the field and also his leadership qualities off the pitch, the way he works with the younger guys, so we will miss him.”

But the Bok flyhalf said he, scrumhalf Ross Cronje, flank Kwagga Smith and centre Lionel Mapoe are there to assist Mostert.

“It now gives an opportunity what ‘Sousie’ (Mostert) can bring and for us as leaders who are really leading the side in obvious different roles, so it’s a nice challenge lying ahead,” he said.

Jantjies said they expect a different Sunwolves side this year despite their 50-22 loss to the Sharks in Durban last weekend.

“I think the biggest difference that I’ve seen is that they have taken in a lot of overseas-based players to mix with their Japanese players but I think the fundamentals stay the same,” said Jantjies.

Jantjies reiterated the Blues game was done and dusted and said they have a different challenge ahead of them.

“We have put last weekend behind, we came together on Monday and we were upfront with one another.

“Like coach Swys (de Bruin) said, we close the book at 12pm, we learned a lot of things out of that game which could aid the team on the road ahead when more tough games will come around,” said Jantjies.