Lionel and the Lions wary of wayward Jaguares

Despite sending their most experienced team ever to Argentina, Swys de Bruin's troops are treading lightly given their poor record there. 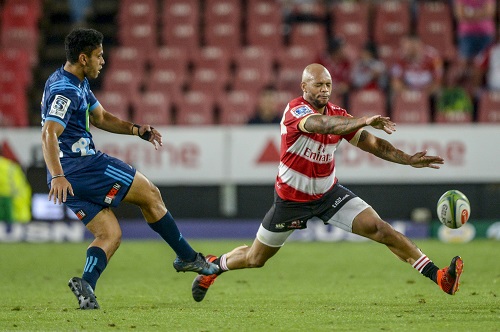 Lions centre Lionel Mapoe predicts the Jaguares will be highly charged up in their Super Rugby battle in Buenos Aires on Saturday.

The 25-man Lions squad departed yesterday on course to a venue where the Lions have never won before, with Mapoe being rested both times.

“They are going to be pumped and they know they have beaten us there before,” said Mapoe.

“They will bring it to us and it’s not going to be easy, but it’s a different team and we’ll be up for it.”

While the Jaguares have scored just one win – against the Waratahs – this year, Mapoe said as a team they have their own goals.

“They blow hot and cold, but we can’t be going there thinking it will be easy,” he said.

Mapoe said they love challenges, but said they took a big knock with the loss to the Blues.

“You could see it in the week in the build-up to the Sunwolves games. You could see the guys are not used to losing.

“We try to do stuff outside the box which doesn’t always work, so we’ll just have to stick to our game plan and focus on us,” he said.

Both partners bring something different.

“For the last four years I’ve been playing with Harold and Rohan and they are two different kinds of players, but it’s nice to settle on momentum and combinations. But they are both good players and it’s a 50-50 situation. I just would like to make the best of it and back whoever gets put inside of my centre position.

“Of the three of us, Rohan is probably the best ball-carrier, it’s just great to have all of them on the field.” Mapoe has put his Bok ambitions on the back burner for now.

“First things first, which is the Lions, if it happens it’s great if I get chosen and that will be a bonus. But first I want to focus on Super Rugby. If I play well and get rewarded with Springbok colours it will of course be great.

“But we have come a long way and we know how to process that and from the coaches box the message is that we must just play our game.”