The Springbok coach insists the Lions pivot's international career is not on the rocks. 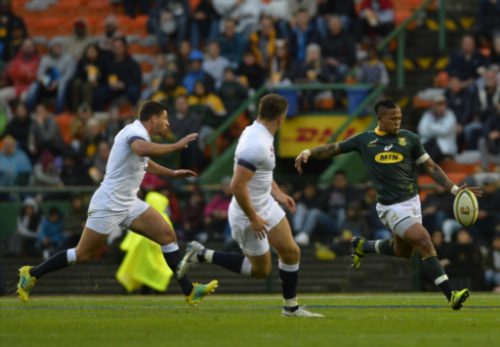 Flyhalf Elton Jantjies is perhaps being unfairly singled out, according to Springbok coach Rassie Erasmus, after the hosts lost the third and final Test 25-10 against England at a soaked Newlands over the weekend.

Describing the Bok performance as “terrible”, Erasmus said the wet weather, experimentation, poor discipline and a pack that could not dominate were among the reasons for their failure after they had won the series with a match to spare.

“People on the outside might think it’s the last chance saloon for Elton, but we might be thinking more long-term,” he said.

“We learned a few things about wet weather and our kicking game, so it will take two or three Super Rugby games for Elton to get his confidence back again.”

Hinting at a possible call-up for Damian Willemse, Erasmus said he did not like to tinker with the No 10 as he made the big decisions, but he had opted to replace Jantjies with Handre Pollard in the second half.

“Unfortunately in this game the pressure piled up, there was a charge-down and the pack wasn’t dominating like before in the wet,” he said.

Their inability to adapt to referee Glen Jackson’s strict policing of the breakdown was perhaps the Boks’ biggest downfall, but Erasmus said he also needed to test new combinations.

England coach Eddie Jones,who ended a losing spell of five Tests, felt there was very little to separate the two countries throughout the series, referring to the Boks as World Cup contenders.

“In the previous two Tests we put ourselves in a position to win the game, but here we stayed composed.

“The Boks played well, are well coached and have a good balance of players. They deserved to win the series.”