He was one of few to emerge with credit from the defeat to Argentina in Mendoza, but is somehow playing Currie Cup for the Lions. 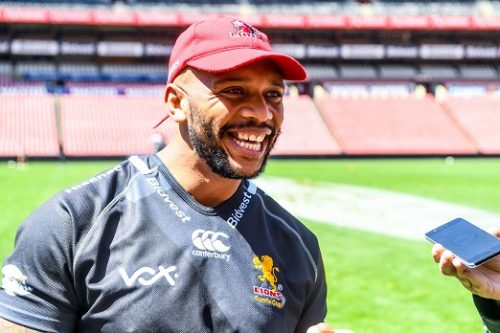 Lionel Mapoe of the Lions during the Emirates Lions Mixed Zone at Emirates Airline Park on September 11, 2018 in Johannesburg, South Africa. (Photo by Sydney Seshibedi/Gallo Images)

As the Springboks’ team selection policy seems to become ever more frantic, it’s become obvious that Lionel Mapoe was one of the first victims.

The reliable Lions centre was one of the few men to emerge with credit from the 32-19 defeat to Argentina in Mendoza a few weeks back.

But that wasn’t enough to see him being included for the current tour to Australasia.

He hasn’t allowed that setback to affect his confidence.

“That happens,” Mapoe said philosophically at a Lions training session at Ellis Park ahead of a crunch Currie Cup meeting with Western Province at the weekend.

“I’ve been in this game for a while now. I’m much more experienced in handling that kind of setbacks. I don’t want to say it’s a negative thing. I want to turn it into a positive development.”

In fact, the 30-year-old believes participating a more competitive Currie Cup – at least in comparison with last year – is a factor that eases the disappointment even more.

“It would have been much more difficult for me if I wasn’t playing rugby,” he said.

The whole saga would probably make most of the Lions’ opponents wary of the dangers of a Mapoe with a point to prove but he’s not going to place undue pressure on himself.

“I’ve got nothing to prove,” he said.

“It’s important for me to just come back into this team and enjoy it. I know when I do perhaps get the call again, I’ll be here. So I just need keep performing.

“The last few games have actually been good for me. I’m basically an old cat with a bunch of young guys. It is nice to play with guys who are exciting and bring out the youth in you again. I’ve been enjoying it.”