Newlands rejoices as Notshe gets his big Bok break

The Stormers star will start his first Test this weekend in a culmination of one of Rassie Erasmus' long-term national projects. 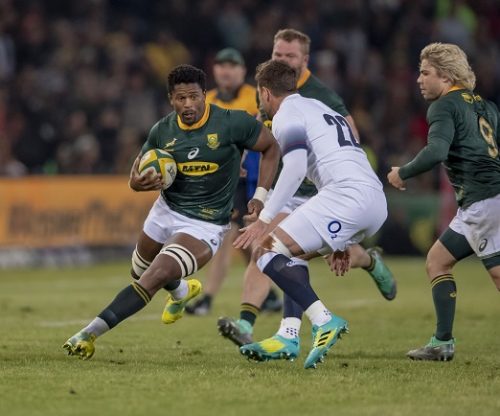 Sikhumbuzo Notshe of South Africa on attack during the 2018 Castle Lager Incoming Series match between South Africa and England at Toyota Stadium on June 16, 2018 in Bloemfontein, South Africa. (Photo by Anton Geyser/Gallo Images)

It’s rather easy to feel that Sikhumbuzo Notshe’s elevation into the Springbok starting line-up for Saturday’s Rugby Championship meeting with the Wallabies in Port Elizabeth is out of the blue.

And to some extent it is.

Yet it’s also easy to overlook the fact that the 26-year-old has quietly collected four caps since making his debut against England in June.

More subtly, Notshe has been one of national coach Rassie Erasmus’ “projects” ever since he returned as SA Rugby’s director of rugby last year.

He was sent to the Blitzboks to work on his off-the-ball skills before returning to the Stormers for Super Rugby, a useful exercise for a flanker known for explosive, game-breaking contributions on attack.

That set of skills should sound familiar because it’s very much what makes the man Notshe replaces, Warren Whiteley, the player he is.

“In terms of play, the two are very similar,” Erasmus said on Thursday.

“Notsh has played sevens too, just like Warren did and both are players who can roam out wide, while also doing the tough stuff. Notsh has won three of the four Tests he’s played in. He’s a guy that’s settled in our environment and close to what Warren brings us.”

Down in Cape Town, Notshe’s Western Province mates and coaches rejoiced at his selection.

“He’s a character. Where Notshe has changed is with his work rate on the field. He was always known as a stepper and a carrier,” said provincial coach John Dobson.

“In last year’s Currie Cup final, he played as a No 6 and he was outstanding. I don’t think we saw one carry. He has now got a bit of both. A lot of people say his physicality is not good enough but jeez, does he have intensity. He has matured a lot. Honestly, I could not be happier. He puts so much in and is such a good man.”

Erasmus, however, admits that Whiteley’s organisational ability will be missed.

“He’s a vital cog in our communication system and he knows other decision-makers like Siya Kolisi, Handre Pollard and Elton Jantjies well. It’s something we have put an emphasis on this week to make sure we don’t lose that.”

Siya, Eben the standout players in a special Bok team of 2021
4 days ago
4 days ago
PREMIUM!

When will World Rugby clean up its messy rules?
4 days ago
4 days ago
PREMIUM!

Siya, Eben the standout players in a special Bok team of 2021
4 days ago
4 days ago
PREMIUM!

When will World Rugby clean up its messy rules?
4 days ago
4 days ago
PREMIUM!