Neil Powell and his troops are back to defend their World Sevens Series crown and start at a happy hunting ground. But the winds of change are blowing. 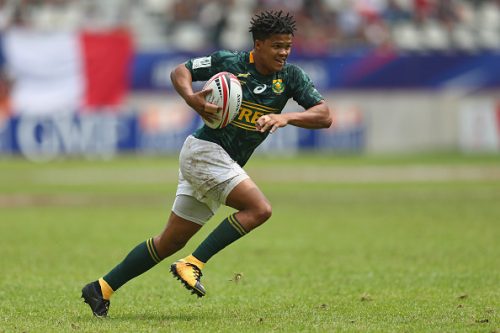 Dewald Human of South Africa breaks away to score a try during the Cup semi final match between New Zealand and South Africa during the HSBC Paris Sevens at Stade Jean Bouin on June 10, 2018 in Paris, France. (Photo by Steve Bardens/Getty Images)

The Blitzboks commence the defence of their World Sevens Series crown on Friday with the season-opening Dubai leg.

It’s been a prosperous two years for Neil Powell and his troops, who boast consecutive overall title victories as well as a fine recent record in the UAE.

South Africa have won three of the last four tournaments in Dubai.

While the team is praised for its professionalism and consistency, as well as an envious development structure, there’s a sense 2018/19 might be a season of transition.

If the Blitzboks are going to commence their pursuit of a glorious hat-trick of overall titles, these are the early question they’ll need to answer.

Are too many former stars missing?

The aforementioned quartet isn’t merely an influential group of players.

Smith was the Blitzboks’ jack-of-all-trades, the guy that made a vital tackle or poached a crucial breakdown ball or unexpectedly burst through the line or was on hand for a winning score.

Nel and Sage were midfield enforcers, equally capable of holding the line in midfield while also creating scoring opportunities.

And then there’s Senatla, who warrants a question of his own…

How big is the Senatla void?

To understand what a massive presence the 25-year-old Stormers winger has been on this circuit, one needn’t look further than his try-scoring record.

To put that into perspective, the only men to have scored more tries than him on the all-time list – Dan Norton, Collins Injera and Santiago Gomez Cora – took a decade or longer to reach those marks.

Senatla truly has been the Blitzboks’ talisman over the past few years and arguably provided the cutting edge that elevated the side from brilliant to world class.

He won’t be replaced easily.

Are some of the stalwarts still going to fire?

One probably doesn’t have to have much doubts about the fire in Kyle Brown’s belly.

The 31-year-old, after all, put his retirement plans on hold because he couldn’t finish last season due to injury.

Yet there will be a few question marks.

Captain Philip Snyman and Branco du Preez have been outstanding servants, but does the motivation remain as high as ever and will their fitness hold?

Their experience will be needed to guide a new generation.

Another question mark is Specman.

Being only available for four tournaments, the Blitzboks need the 29-year-old to pretty much fire immediately.

He can’t be distracted by his pending duties with the Bulls in Super Rugby and will be keeping a spot away from someone else if he doesn’t add value.

Will the new generation step up?

Given the immense success of the national sevens academy, this is a question one might want to answer immediately with a ‘yes!’.

Indeed, Powell and co have brilliantly groomed rookies over the years to first learn from the experienced men and then effectively replace them in those roles.

For example, Ryan Oosthuizen can already be considered the spiritual successor to Snyman, while Dewald Human – a hit in the latter stages of last season’s campaign – has the makings of the new Du Preez.

Debutant Impi Visser will be keen to make his mark and Muller du Plessis is a promising prospect.