It’s a Blitzboks bonanza for the Bulls

X-factor is certainly not lacking in Pote Human's group of backs before the start of Super Rugby. 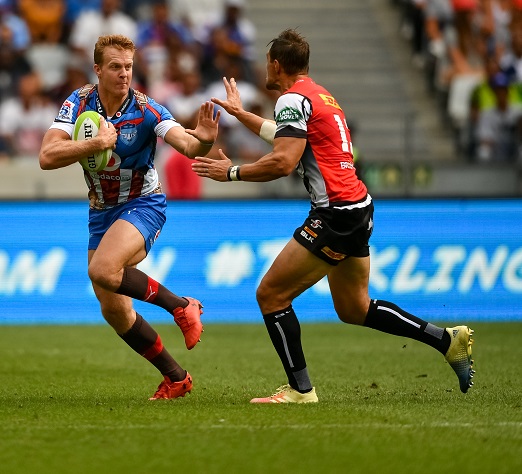 Dylan Sage of the Vodacom Bulls in action during the during the Super Rugby, #SuperHeroSunday match between DHL Stormers and Vodacom Bulls at Cape Town Stadium on February 03, 2019 in Cape Town, South Africa. (Photo by Anton Geyser/Gallo Images)

Call it a Blitzboks bonanza.

The Bulls on Thursday illustrated vividly the amount of X-factor they’ll have at their disposal in this year’s Super Rugby campaign with a whole assortment of former national sevens stars being involved in this weekend’s final warm-up against the Sharks in Ballito.

Most intriguingly, coach Pote Human has selected Dylan Sage at inside centre.

Much like his Blitzboks colleague, Ruhan Nel, the 27-year-old has been identified as a potentially potent playmaker in a backline brimming with talent, but possibly lacking a general since Jan Serfontein’s move to France.

Sage was one of the standout performers for the men from Loftus in last weekend’s Superhero double-header in Cape Town, impressing with his running lines.

But he also brings much needed beef on defence for a side still struggling to keep out opposing teams.

One of the hallmarks of his time in sevens was his crunching tackles.

Yet another former sevens trump card is Tim Agaba.

“His role won’t be confined to just playing No 8. I’m hoping to use him as a flanker as well,” said Human.

“His skillset is amazing as he’s an experienced player in sevens. He also did well for us last year before his untimely injury. He can play anywhere. In fact, he can even help out at lock if we really need him.

“We’ve got a group of excellent loose forwards. I’m still trying to figure out a few combinations there.”

And just to add to cherries on top, the hasty duo of Cornal Hendricks – a Bok under Heyneke Meyer – and Rosko Specman has also been summoned.

“Rosko hasn’t played fifteens for some time, so I’m very keen to see him have a go. Cornal was good against the Lions two weeks ago, he deserves another chance,” said Human.