Yet the national coach didn't reach last year's magical number and Super Rugby franchises' efforts have been sporadic to date. 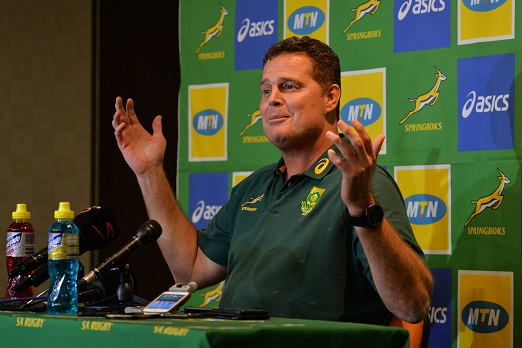 Implemented in 2014, the initiative calls for a national team that has 50% black representation this year.

That means at least 12 players of a 23-man match squad must be non-white.

There will be scepticism over Erasmus’ ability to achieve that target given that the Boks missed last year’s percentage.

“We didn’t hit our target of 45% last year and that was disappointing,” Erasmus said in Cape Town following an alignment camp with members of the Stormers.

“But I’m glad that we had a lot of success stories if you think about what Aphiwe Dyantyi achieved and so on. We gave a lot of new players of colour opportunities, and we know that there is a bigger pool to draw on going into the World Cup.”

The emergence of Dyantyi and wing partner Sbu Nkosi, the captaincy of Siya Kolisi and the continued work ethic of Bongi Mbonambi has indeed been positive.

Erasmus maintains though that those efforts will increase in 2019.

“I have to make it clear that the target is 50% across the course of the season. It’s 50% on average. We might be over that when we select the World Cup squad, and we might be under it. What’s important is that we average 50% over the whole Test season,” he said.

However, the tricky thing for Erasmus is that he’s still dependent to a large extent on non-white players being granted opportunities at Super Rugby level.

A bit surprisingly, Pote Human’s Bulls has been Erasmus’ biggest ally in this regard though none of the four franchises have come close yet to the magical 12/23 mark.

While there’s clearly work to be done, some context is also required.

For example, are the Sharks, who average a lowly eight black players per game, really unforgivably culpable when a quartet of black African players – Lukhanyo Am, Nkosi, Makazole Mapimpi and Aphelele Fassi – are considered key players and regularly start?

The Lions have also previously argued that the quality of opportunities should count more than quantity.

“I believe that we will (reach the target). I’ve been encouraged already about what I’ve seen in the 2018 Currie Cup, and even when looking at the make-up of teams like the Sharks in Super Rugby. Again, there might be a few challenges if there are a lot of injuries,” said Erasmus.

Either way, the issue will remain contentious on all fronts.

When will World Rugby clean up its messy rules?
3 days ago
3 days ago
PREMIUM!

When will World Rugby clean up its messy rules?
3 days ago
3 days ago
PREMIUM!