It's a first title in a decade for Rassie Erasmus' charges in a performance that surely counts for a lot going into the World Cup. 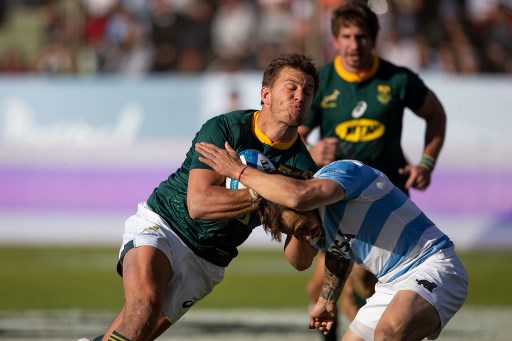 Cries of sheer relief and jubilation could figuratively be heard all the way from Salta where the Springboks beat Argentina 46-13 on Saturday to clinch their first Rugby Championship title since 2009 in emphatic style.

A five tries-to-one drubbing perfectly exemplified the dominance of Rassie Erasmus’ troops as they beat the Pumas at their own game and earned the bonus point that ensured they end on 12 points in the final standings, comfortably ahead of Australia, who surprisingly beat the All Blacks earlier in the day in Perth.

The Boks, who lead 24-13 at the break, initially had to dig deep in the second half after scrumhalf Faf de Klerk was yellow-carded in the 46th minute for a professional foul, but their relentless defensive play caged the hosts and eventually frustrated them into to totally surrendering.

Erasmus will be first to say this triumph doesn’t guarantee World Cup success, but it sure provides great momentum.

While tighthead Trevor Nyakane deserved high praise for his powerful scrum performance and an outstanding work rate on defence, flyhalf Handre Pollard – who contributed a record 31 points for an away Test – showed why he is rated as the best flyhalf in SA by some distance. He read play well and he kicked superbly off the tee. His dominance when attacking the gainline also saw him score two tries.