A World Cup spot completes a meteoric rise for the gifted rookie scrumhalf. 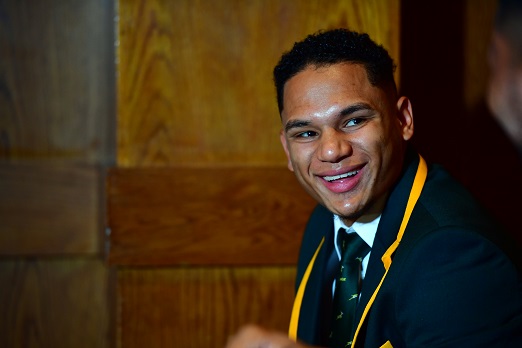 The Kylemore community outside Stellenbosch will never be the same again following the fairy tale rise of Springbok scrumhalf Herschel Jantjies. Jantjies, 23, who was one of the most popular choices in the World Cup team announced on Monday, recalled how crowded his family home was after he was included in the national squad.

“In general people were just very excited about my inclusion in the Bok squad and we had a lot of people over there,” Jantjies said.

“We also had a family lunch and there were some fans and neighbourhood people there.

“They came around to ask for my picture to be taken and to shake my hand and to convey their congratulations and best wishes.”

Jantjies, who scored two tries on debut against Australia at Ellis Park in the recent Rugby Championship, became a hero almost overnight when he scored another try the following week to clinch a 16-16 draw against the All Blacks in Wellington.

Those performances gave him the belief that he could fulfil his dream of playing at the World Cup.

“Everything just started from there. I started to get the belief and the confidence, and everything just sort of snowballed from there,” said Jantjies, who has played 21 games for Western Province since 2016, and 16 matches for the Stormers in the Super Rugby competition.

“Initially I was shocked and it was definitely a surprise to me. At the beginning of the year I wouldn’t have thought in my wildest dreams that I would be standing here with the rest of the World Cup squad.

“I was deeply surprised and humbled.”

After making the final squad for the global showpiece in Japan, he hopes to continue making a valuable contribution.

“Since that first time in a Test at Ellis Park I was overcome with excitement, but for me the focus was just to keep doing what I do best and keep on working at my game and improving.”