Referee Rasta Rasivhenge has come in for criticism for the way he handled the game, but the Lions boss said, “It’s not Rasta’s fault, the blame is all our own." 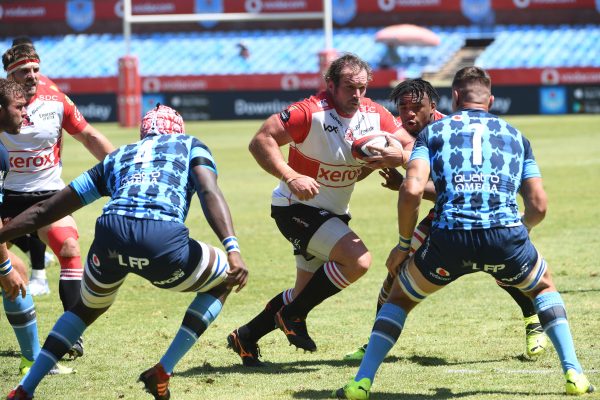 Jannie du Plessis looks for a gap in the Currie Cup semifinal between the Lions and the Bulls. Picture: Gallo Images

Lions coach Ivan van Rooyen blamed the high error-rate of his own team and the ill-discipline that led to both of the locks being yellow-carded for the Currie Cup semifinal defeat against the Bulls at the weekend, and said the blame belonged to his side rather than the referee.

The Lions went down 26-21 to the Bulls, but after 50 minutes the teams were level at 14-14. Infringements at the ruck and maul then allowed the Bulls to score from a lineout drive in the 57th minute, but the crucial blows to the Lions came a minute later when referee Rasta Rasivhenge yellow-carded Marvin Orie for his second high tackle on Bulls captain Duane Vermeulen.

The home side poured on to the attack from the penalty and two minutes later Willem Alberts was sent to the bin after repeated offsides infringements by the Lions.

”Obviously our discipline left us wanting and with two locks off the field it was always going to be tough,” Van Rooyen said.

“Whether I think the cards were harsh or not harsh does not make a difference and you’re not going to win any game if you have 20 penalties against you. That gives the opposing team momentum and then the referees tend to be more harsh on you anyway.

“But it’s not Rasta’s fault, the blame is all our own and we gave them ball too easily with our mistakes. A couple of times we did try to run in our own half and put ourselves under pressure, but we showed we can put teams under pressure by carrying the ball through the phases, but too many times we would just turn the ball over and then the pressure would be back on us. We felt we had the momentum when we kept the ball.”

But from being also-rans in Super Rugby at the start of 2020, the Lions were on the fringe of competing for the Currie Cup crown and Van Rooyen said there had been good improvement shown through the last season.

“At the start of Super Rugby, we had a lot of gaps, but in certain areas there have been big improvements – the understanding of how we want to play, our defence and our set-pieces are all much better. We were good enough to win this semifinal, so it hurts. We also could have had a home semi-final but we had two home games cancelled, which made it tough.

“But our senior guys – Willem Alberts, Jannie du Plessis, Jaco Kriel and Elton Jantjies – have been outstanding. They have grown the younger guys and they play a big role off the field. They will still play a big role in the future. And I’m very proud of the fightback and character shown in this semifinal.”