Replacement loose-forward Arno Botha scored both of the home team's tries in a match that was deadlocked at 19-19 after 80 minutes. 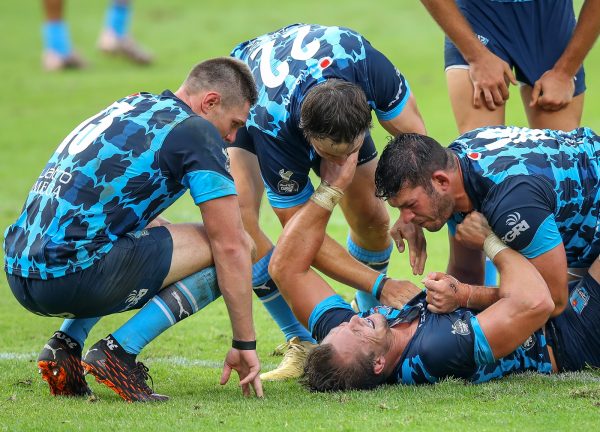 Bulls players celebrate with replacement loose-forward Arno Botha who scored the winning try as the Bulls beat the Sharks in extra-time in the 2020 Currie Cup final at Loftus Versfeld on Saturday. Botha scored both his team's tries. Picture: Getty Images

A try 72 seconds from the end of extra time by Arno Botha settled an industrial-strength clash and gave the Bulls the most dramatic of victories over the Sharks in a gripping Currie Cup final at Loftus Versfeld on Saturday.

The Bulls deserved the trophy for their incredible durability and simple refusal to be beaten however down-and-out they looked. And the Sharks certainly had one hand on the trophy when they led 19-9 with 15 minutes to go.

But the Bulls fought their way back. It started at a scrum, where they had been dominant for most of the afternoon but without getting much reward as referee Jaco Peyper decided not to make the final a penalty-fest. This time he did blow the Sharks up though as loosehead Ox Nche went down on his knee.

The Bulls set the lineout and although the drive was stopped, they maintained possession, kept bashing away and earned another penalty, close to the poles. Captain Duane Vermeulen went old school with a tap-and-go by the pack, from which flank Botha forced his way over for the try.

The conversion by Morne Steyn and then a penalty by his replacement Chris Smith, after great runs by wing Stravino Jacobs and centre Cornal Hendricks, levelled the scores. Smith had a chance to win the final after the hooter for full time, but his angled penalty swung wide.

But it was Botha’s second try that will live long in the annals of Bulls rugby, after both Smith and Curwin Bosch had missed long-range penalties in the first half of extra time. A relentless Bulls pack kept driving forward and the veteran found enough space to get to the line and reach over the cup-winning try.

But for much of the game, the Currie Cup looked set to find new premises at Kings Park as the Sharks were winning the kicking game and destroying the Bulls at the breakdown. The first half was interrupted after 24 minutes, with the Bulls leading 6-3, by a 40-minute delay for lightning.

Bosch and Steyn traded penalties when they returned, before the Sharks opened up the game just before halftime when wing Sbu Nkosi powered over in the corner. Being behind 13-9 at the break was mostly down to the Bulls’ ill-discipline and own mistakes. 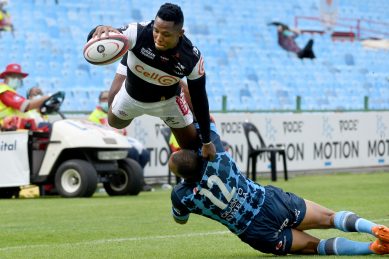 The try came after a Sharks player was taken out in the air and although Bosch missed that angled penalty, Steyn then sent the restart straight into touch. From the scrum on the 22, the Sharks spread the ball, fullback Aphelele Fassi joining from deep to create the extra man and Nkosi finishing with a leap through the cover-tackle.

The Bulls did not initially come out of the changeroom any better, conceding two more penalties to Bosch.

But what is clear, is that there is a great resolve and winning drive at Loftus Versfeld. They might not even have played the better rugby, but that’s why the Currie Cup has returned to Pretoria after an 11-year absence.