The men from Durban were in action for the first time since facing the British and Irish Lions twice in four days. 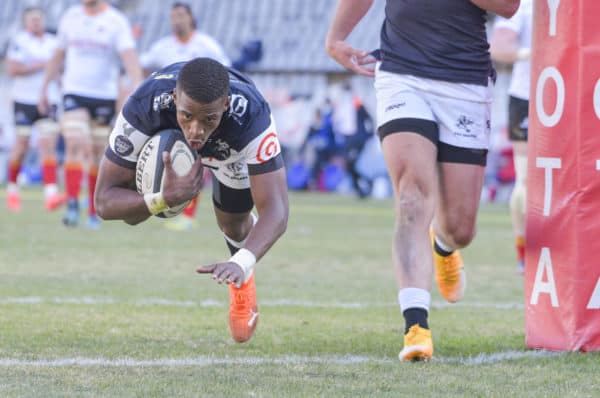 Grant Williams of the Sharks goes over for a try against the Cheetahs in Bloemfontein on Saturday. Picture: Frikkie Kapp/Gallo Images

With flyhalf Curwin Bosch in sublime form, the Sharks produced an impressive 47-30 win over the Free State Cheetahs in their Currie Cup match in Bloemfontein on Saturday, going to the top of the log with the bonus point triumph.

Bosch was excellent with the boot, succeeding with nine of his 10 kicks at goal through five conversions and four penalties. He was also superb with ball in hand, sparking several of the counter-attacks that punished the Cheetahs when they kicked with a poor chase and also playing on the gainline with aplomb.

The Sharks made a horror start though. From the kickoff, the outstanding Rosko Specman’s brilliant chase led to a penalty. Although scrumhalf Ruan Pienaar missed the kick, the Sharks conceded a couple more penalties in the opening minutes and the Cheetahs finally punished them when Specman deservedly scored the first of his two tries, dotting down a Brandon Thomson grubber after a super run off a lineout by centre Siya Masuku.

It was a feisty match throughout and Pienaar then stupidly went around the side of a maul and slapped the ball out of hooker Kerron van Vuuren’s hands, earning him a yellow card. With the Free State captain off the field, the Sharks managed to get into the game.

The Springbok flyhalf then sparked the counter-attack from a deep kick that led to the second try, on the half-hour, by scrumhalf Grant Williams, with the help of a powerful run by wing Marnus Potgieter.

The Sharks ended the first half with another wonderful counter-attacking try, wing Thaakir Abrahams this time taking a kick, evading the lone chaser and then slipping away from several other defenders, fullback Anthony Volmink completing the try to give the visitors a 24-11 lead at halftime.

Bosch added another penalty early in the second half to stretch the gap to 27-11, but the Cheetahs managed to partially dig themselves out of the hole with two tries in five minutes. Specman set up the first and then Masuku produced a brilliant run when his team were back-pedalling, leading to the second try.

The Sharks’ lead had been cut to 27-23, but Bosch quickly produced another moment of magic, dummying, slipping through a gap in the defensive line and getting his offload away in the tackle to Mchunu, who put in another great run for Williams to score his second.

Specman replied with a scintillating solo effort from 62 metres out, but the Sharks kept piling on the pressure, with Bosch kicking two more penalties and Van Vuuren scoring a lineout drive try.

Everitt looks to Pienaar, Chamberlain to guide Sharks in Cardiff
5 days ago
5 days ago

Everitt looks to Pienaar, Chamberlain to guide Sharks in Cardiff
5 days ago
5 days ago