Bulls leave it late to down Griquas at Loftus Versfeld

The Bulls brought their A-game in the final quarter as all the exciting young talent they have bought stepped into the limelight. 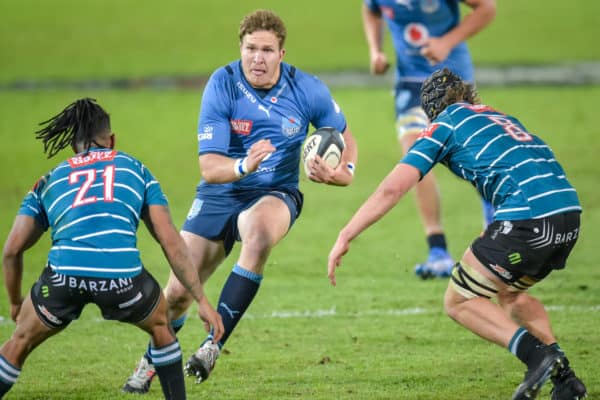 Bulls prop Jan-Hendrik Wessels on the charge against Griquas in a Currie Cup match in Pretoria on Wednesday. Picture: Christiaan Kotze/Gallo Images

Twice the Bulls built a spacious lead for themselves and twice they had to repel ferocious Griquas’ comebacks before eventually pulling away in the final quarter to win 56-33 in their Currie Cup match at Loftus Versfeld on Wednesday evening.

Having weathered a torrid start when they struggled at the breakdowns, conceding several penalties and a yellow card to prop Mornay Smith, the Bulls used the power of their rolling maul and scrums, as well as some swift counter-attacking play, to score three tries for a 20-6 lead.

The first went to flyhalf Johan Goosen and was thanks to a very fortuitous bounce after scrumhalf Zak Burger charged down a kick. Hooker Schalk Erasmus then scored from a maul and wing Kurt-Lee Arendse slipped through a tackle to score in the left corner after a sweeping counter by the Bulls from deep in their own half.

The Bulls closed the half in sloppy fashion though, allowing Griquas flyhalf George Whitehead to kick a third penalty and then the home side conceded a scrum penalty inside the visitors’ 22. Outside centre Chris Hollis made a break and scrumhalf Stefan Ungerer squeezed over in the corner to bring Griquas right back into the game at 16-20 at the break.

Another Whitehead penalty early in the second half closed the gap to just one point, but then the Bulls simply powered their way into a 30-19 lead as lock Walt Steenkamp drove over for a try and Goosen kicked another penalty.

Still Griquas came back although the Bulls were once again their own worst enemies as Arendse dropped the restart and then stopped Griquas from using a blindside overlap with a deliberate knock-on. A yellow card and a penalty try were rightly awarded.

But then the Bulls brought their A-game in the final quarter as all the exciting young talent they have bought stepped into the limelight.

Chief amongst those was eighthman Elrigh Louw, who burst clear from next to a ruck 20 metres out for the try that provided some breathing space. The rolling maul provided further tries for Erasmus and his replacement young Jan-Hendrik Wessels, while Arendse redeemed himself with his second try.

Meanwhile, after a pulsating and perhaps frustrating 80 minutes the Cheetahs and Lions played to a 44-all draw in their match in Bloemfontein.

It was a match when defence – and everything about keeping the opposition out – was left in the change-rooms.

In total, 12 tries were scored – six in each half, many of them quite spectacular efforts from long range and in which several players handled the ball, which had been taken through several phases.

It was a real ding-dong battle, with the Cheetahs racing into a 15-0 lead early on, just for the Lions to hit back with three tries of their own.

The lead then changed sides several times in the second half when it became a case of “you score, I score” until Lions No 10 Jaden Hendrikse kicked a penalty in the 79th minute to make it 44-all. And it stayed like that until the final whistle.

Lions v Ulster: 'Defence is what will win it for us'
3 days ago
3 days ago

Lions v Ulster: 'Defence is what will win it for us'
3 days ago
3 days ago