The teams will meet for the second time in eight months after earlier contesting the delayed 2020 final in January. 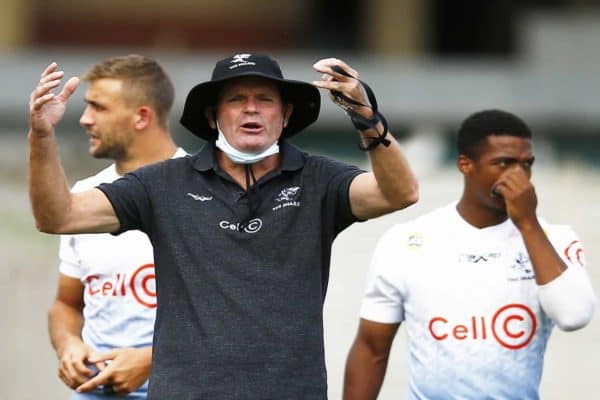 Sean Everitt has highlighted what the Shark need to do against the Bulls in the Currie Cup final on Saturday. Picture: Steve Haag/Gallo Images

Flyhalf Lionel Cronje made his name in the Eastern Cape with his ability to produce some magical trick plays, but Sharks coach Sean Everitt said on Thursday that the visitors will not be looking to deck out their game with any embellishments when they take on the Bulls in the Currie Cup final on Saturday.

Everitt’s comments mean the Sharks have been sending mixed messages this week, with captain Phepsi Buthelezi earlier saying that they wanted to play “their brand of rugby” and “move the Bulls around”.

But the coach who has risen through all the structures at Kings Park toned down the views of his enthusiastic eighthman.

“A Currie Cup final is not the time to be experimenting with manoeuvres. Lionel kicks really well and he brings something to the attack as well. But there is a plan in place, Curwin Bosch has a very good boot at the back and he can counter-attack. But Lionel is our general and I’m sure he will execute the plan. A lot depends on what you get from the Bulls defence,” Everitt said.

“They like numbers on their feet and they are really good at it. We will play what is in front of us and if they have a full defensive line then it means there will be space behind. A solid set-piece gave us the platform to beat the Bulls the last time we played them. If you get that right then it makes your job a lot easier. If we can do that again then I’m confident we can get the result.”

The Sharks coach said his team also have to avoid conceding a chain of penalties at the start of the final.

“If you look at the Sharks’ performances the last few games then our discipline has improved, but we conceded six or seven penalties in the first half of the semi-final and that put us under pressure, it meant we couldn’t build scoreboard pressure,” Everitt said. “In last season’s final, we also gave away a couple of early penalties which Morne Steyn kicked.

“Not conceding early penalties is important to how you want to play, you must never underestimate the influence of scoreboard pressure in a final. There will be nerves, and the team that settles down first will probably go on to make the better start. And that’s really important in a game of this magnitude. Both teams need to handle the intensity of the game.”