The senior players need to step up and be willing to get their hands dirty on the gainline and at the breakdown. 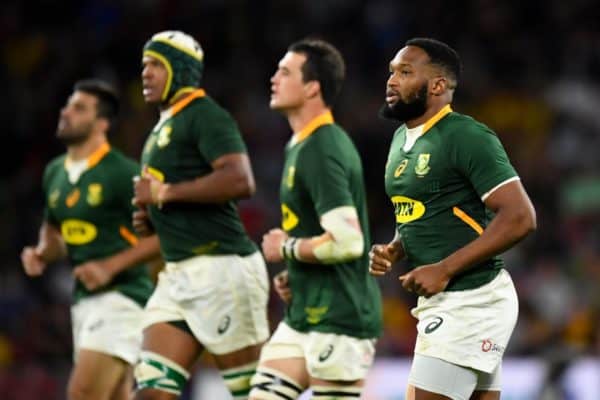 Lukhanyo Am and Springbok teammates during their match against Australia on Saturday. Picture: Getty Images

The daunting All Blacks are South Africa’s next opponents in the Rugby Championship and they need to get down to business next week and fix the many aspects of their game that have not been functioning over the last two weekends in back-to-back losses to Australia.

The only problem is that coach Jacques Nienaber says he doesn’t really know where to start, which is as much of an admission of the Springboks’ numerous problems as anything else.

Captain Siya Kolisi did put his hand up at the weekend and said the players were to blame because they had been given a plan – which had worked in the past – by the coaching staff. But any plan is only as good as its implementation… and the Springboks’ execution has been terrible.

Over the last two weeks they have produced sloppy rugby that is not worthy of either the world champions tag or the number one ranking which they are officially set to lose to the All Blacks when the list is updated on Monday.

What is certain is that the senior players – the World Cup winners in the Bok squad – need to step up now and be willing to get their hands dirty on the gainline and at the breakdown, and make their tackles. The Wallabies thoroughly dominated those crucial departments of the game, where the famously physical Springboks have been strangely timid.

Their ball-carries have been faltering and tactically they seem to have ignored the enormous pressure the Wallabies put on the breakdown.

Some personnel changes, including Cheslin Kolbe on the wing, will provide an x-factor, but South Africa’s many efforts to get the ball wide on Saturday were fruitless because a lack of direct running in the build-up meant Sbu Nkosi and Makazole Mapimpi received the ball without enough space. Centres Lukhanyo Am and Damian de Allende quickly need to regain the form they showed in the British and Irish Lions series.

Likewise, Duane Vermeulen has been a pale shadow of his usual self at eighthman, but more game time will hopefully work, while Eben Etzebeth’s lack of dominance is perhaps due to too much rugby.

Franco Mostert was one of the more industrious forwards on the field at the weekend, but would he not be better employed at lock, especially if Lood de Jager is still not over his concussion? That would allow a powerful ball-carrier like Dan or Jean-Luc du Preez to be included on the blindside flank.

The much-vaunted Stormers front row of Frans Malherbe, Bongi Mbonambi and Steven Kitshoff have also not had their usual impact, although South Africa’s set-pieces have been solid.