Nienaber disappointed with ‘out of character’ Bok defensive effort

“Conceding three tries is something that doesn’t sit well with us," said the Bok coach after the defeat to England at Twickenham. 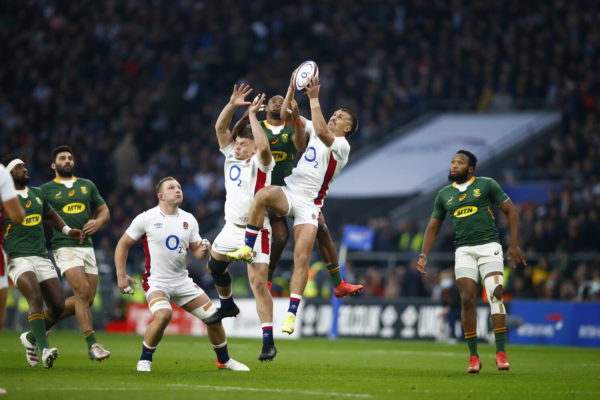 Henry Slade of England takes a high ball during the Test against the Springboks at Twickenham on Saturday. Picture: Steve Haag/Gallo Images

An uncharacteristic defensive performance from the Springboks contributed to their last-gasp 27-26 defeat to England in their final end-of-year-tour clash at Twickenham on Saturday afternoon.

Coach Jacques Nienaber admitted that there were a few turning points in the match, key being the three tries the Boks conceded, all from quick attacks from set pieces.

“It was very disappointing, especially in terms of how out of character it was for the team, we don’t normally concede from set pieces and it wasn’t something we weren’t prepped for,” admitted Nienaber.

“I thought in the first half they scored two tries which I felt we could have handled better, so it was out of character. They got into our 22m and they utilised the opportunities and built scoreboard pressure on us.

“We then did well to get back into the game and take the lead and then had it until the last minute. So the disappointing part was probably us conceding and having to work hard to get a foothold in the game again and then not being able to finish it off at the end. Those were the turning points.”

Arguably the big moment in the match came in the 66th minute, after the Boks had done fantastically well to battle back in the second half and were dominating, missing out on tries when Kwagga Smith was held up over the line and captain Siya Kolisi couldn’t get an offload to wing Jesse Kriel on the overlap.

However they had managed to take a 64th minute lead thanks to replacement flyhalf Elton Jantjies knocking over a penalty from in front to put them ahead for the first time by one point, only for England to hit back against the run of play two minutes later with a try from a lineout on the halfway line.

“Mistakes happen and I said to the players we will never judge a player on a mistake, they don’t do it on purpose. All we can judge is the attitude that they go into the game with and show on the field, and the work rate on the field,” explained Nienaber.

“Those are things that they can control, sometimes you knock a ball or miss a tackle or miss a read and things like that happen, it’s something we will have to fix.

“But conceding three tries is something that doesn’t sit well with us, we are a team that concedes less than a try a game on average during the season. I don’t know where we are currently but it’s my department and something that we will have to look up and fix.”