Chiefs and Pirates coaches fire heated verbal volleys at each other

Pirates' Rulani Mokwena pulled the trigger first, suggesting that his counterpart Ernst Middendorp was promoting what he termed "thuggish" displays as his players were victims of rough tackles and a punch to the nose. 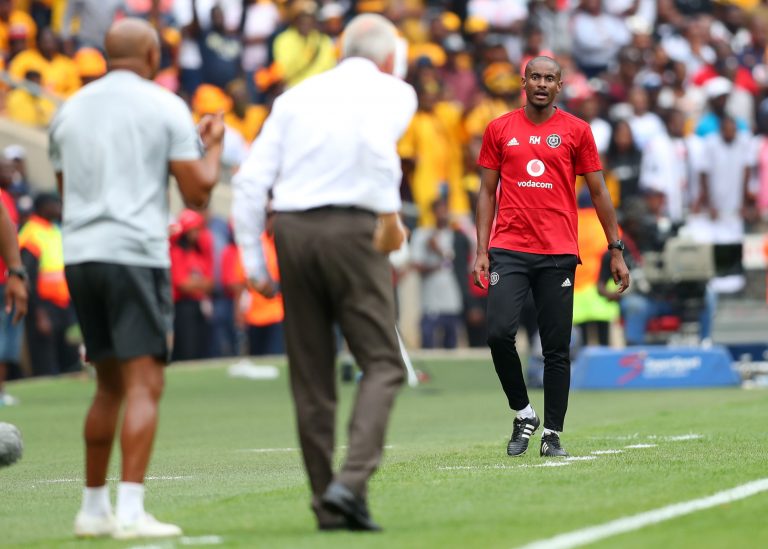 The dramatic action that saw Kaizer Chiefs and Orlando Pirates dish up what will go down in history as one of the memorable Soweto derbies continued beyond the 90 minutes as the two coaches were at each other’s throats in the post-match media conference.

The game ended 3-2 in favour of Amakhosi in a game that had all the ingredients that make for a real derby match – brilliantly taken goals, questionable refereeing decisions, player scuffles, a red card and heated dugout exchanges between opposition benches.

An own goal by Ntsikelelo Nyauza 50 seconds into the match began all the drama and Leonardo Castro and Daniel Cardoso added to that while Vincent Pule and Gabadinho Mhango scored with excellently executed efforts for the Buccaneers who were just unlucky to end up on the wrong side of the scoreline.

Pirates’ Rulani Mokwena pulled the trigger first, suggesting that his counterpart Ernst Middendorp was promoting what he termed “thuggish” displays as his players were victims of rough tackles and a punch to the nose.

“I hear coach Middendorp say he doesn’t know what happened with the red card, but I have watched it again and I think it’s not just (Erick) Mathoho who should have been sent off. His thuggish behavior doesn’t belong on the pitch. It started with things like (Willard) Katsande’s tackle on Fortune Makaringe in the first half. It was over the top, a career-threatening tackle and thuggish as well. Those things don’t belong in South African football.

“Chiefs are good enough to beat us on tactics and personnel, they are well-coached team – excellent,” said Mokwena who was obviously fuming. He even took offense at Amakhosi media officer Vina Maphosa first introduced him as just Rulani and not “Coach Rulani”.

Middendorp tried to keep a straight face but it was easy to see that what Mokwena was saying was annoying him. He sat with his hand on his chin looking straight at Mokwena as he spoke.

“It was definitely a hectic game. In the end three points and soccer is about results. If you were in a game and (afterwards) you have nothing to talk about you then have to kiss each other,” Middendorp chirped.

“The preparations start three or four days before the game then comes the 90 minutes which get heated and whatever you do – intentionally or whether you are provoked – that is something that happens. Some coaches take it and sometimes you need an hour longer or a day more to process it. But I already have friends and I don’t need another one,” he added, suggesting that he and Mokwena would not be having any social rendezvous any time soon.

The win took Amakhosi 10 points clear atop the standings, but second placed Sundowns have a game in hand. Golden Arrows are in fourth place, 11 points adrift of the leaders Chiefs.