'That game has certainly changed his life,' said a source close to Bruce Bvuma on the first leg of the Champions League semifinal against Wydad. 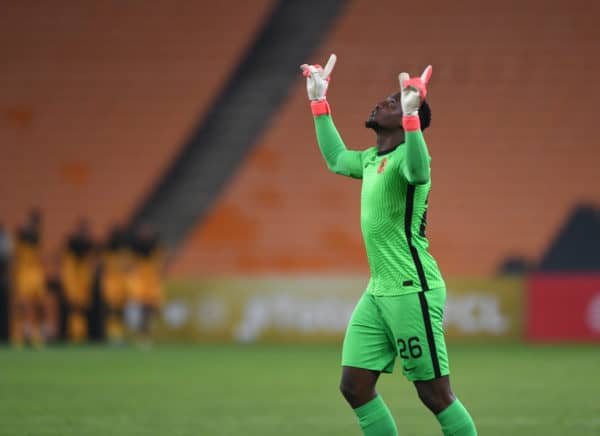 Bruce Bvuma is set to be rewarded with a new Kaizer Chiefs contract. Picture: Sydney Mahlangu/BackpagePix.

It hasn’t been easy, but Kaizer Chiefs goalkeeper Bruce Bvuma has definitely earned himself a lot of admirers after bidding his time for a chance to get the recognition in the Amakhosi senior team.

The shot-stopper’s heroics in Morocco helped the club to put one foot in the final of the Caf Champions League after their 1-0 victory in the first leg against Waydad Casablanca last weekend.

According to a close source to the Kaizer Chiefs development graduate, the goalkeeper will be rewarded with a lengthy contract, with his current term coming to a close at the end of this month.

“That game has certainly changed his life, there is more respect for him and they believe that he is the future of the club. He is very happy about the whole thing because he loves the club so much. A new contract is coming for him and it’s going to change his life,” said a source.

“He also knew that he had to make it a point that he is on top of his game this season every time he was given a chance to play. I believe he has done so, especially in these Caf games. You will see, as soon as the Champions League is done, he will be counted among the players who have their contracts extended and it will be an improved one.”

The source further revealed that the 26-years old shot-stopper doesn’t expect to be the number one goalkeeper at the club just yet. He is still learning from the experienced Daniel Akpeyi and much loved Itumeleng Khune.

“The truth is that Bvuma won’t be the first choice anytime soon with Khune and Akpeyi still there. He just knows that he just has to be patient as he has been all these past years,” he concluded.

Bvuma and his Kaizer Chiefs teammates will be looking to seal their spot in the Champions League final when they host Wydad in the second leg at FNB Stadium on Saturday.