AmaZulu are looking to make a comeback to the Absa Premiership next season, with the team on the brink of agreeing terms to buy the franchise of Thanda Royal Zulu. 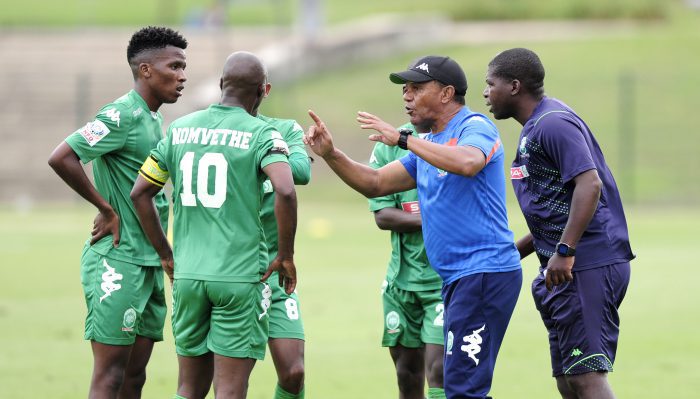 Phakaaathi’s investigations have revealed the sale is imminent and that there are just a few issues which need to be ironed out before the matter can be made public. This includes getting approval for the buy-out from the Premier Soccer League.

A source who works at Amabhubesi said it is no secret that chairman Pierre Delvaux wants to sell the team that won this season’s National First Division title.

“He always said that once the team were promoted he would sell so as to recoup the money he had spent. He has no interest in football, that is why he gave Jomo (Biyela, the team manager) full powers to run the side while he focused on his other businesses. It is however unfair on people who worked hard to get the team promoted,” said the source.

Usuthu spokesman Brilliant Mkhathini, however, said he had not heard anything about the pending sale. “I think the information is coming from their (Thanda) side. We have nothing to say on it as I have not been updated. What I can tell you is that we are focusing on our team and getting ready for next season,” said Mkhathini.

Another source close to Usuthu said the deal was long done: “Pierre offered our chairman (Patrick Sokhela) his status even before they were promoted. I am sure Pierre was holding his breath, hoping we (AmaZulu) didn’t get promotion as well because he would lose out on the sale agreement they had reached.

“We have not been officially told but there is something brewing and the senior managers cannot contain their excitement, but have declined to divulge anything except to say something big is coming,” said the source.

The source said he thinks the reason the sale has not yet been made public is because it has to go to the Premier Soccer League (PSL) for approval.

Phakaaathi’s attempt to get hold of Delvaux proved futile as he didn’t answer his phone and later asked that he be SMS’ed the questions, which he had not yet responded to at the time of going to print.