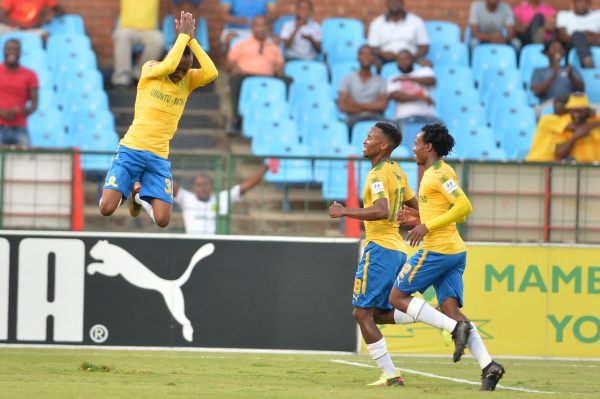 The result ensures the Brazilians remain at the log summit with 46 points from 24 matches.

A slow start for the hosts allowed the visitors to enjoy more time on the ball and they had two corner kicks, but could not trouble Denis Onyango in the opening 10 minutes.

The Brazilians would start with their interchange of passes going forward and Sibusiso Vilakazi saw his well taken header not troubling Daniel Akpeyi in the 18th minute.

A minute later, the Chilli Boys penetrated the hosts, but Onyango read the danger and came out of his line to deny Linda Mntambo.

Mntambo nearly capitalised again when Wayne Arendse’s back pass did not reach Onyango, once again the Ugandan read the danger and made a superb save in the 28th minute.

Although it was a scrappy affair after the half-hour mark, Tau capitalised on a defensive error following a dangerous pass into the box – the striker pounced making it 1-0 in the 36th minute.

However, Pitso Mosimane’s charges emerged from the tunnel with more fluidity in their game and Tebogo Langerman made a good run on the left flank to set up Vilakazi, yet Akpeyi made a wonderful block in the 54th minute.

Sundowns were awarded a free kick on the edge of the area after Billiat was brought down by James Okwuosa, but the Zimbabwean’s effort was swallowed by Akpeyi in the 67th minute.

With 16 minutes to go, substitute Mxolisi Macuphu came close to making an immediate impact when he unleashed a shot from range, but it sailed over Onyango’s crossbar.

Chippa were torn apart with 10 minutes to play when Themba Zwane teed up Billiat, who was on a run into the penalty area before easily slotting home past the oncoming Akpeyi, 2-0.

The Port Elizabeth-based side continued to probe for a goal and Onyango produced a fine save in injury time to tip it over the crossbar.

However, the hosts held on to their lead and condemned the visitors to the 13th spot with 30 points from 25 league games.