Steve Komphela's tenure as Kaizer Chiefs coach came to an ugly end as he tendered his resignation immediately after a 2-0 defeat to Free State Stars at Moses Mabhida Stadium in Durban on Saturday night. 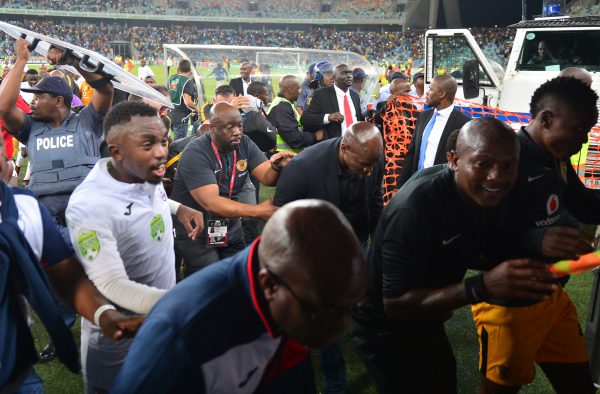 The night turned ugly for Amakhosi not only with the defeat but with angry fans invading the pitch and chasing the players and also assaulting security personnel.

The stadium’s seats were also set alight as supporters rioted for the second time in two weeks. A fortnight ago the fans threw missiles onto the pitch after an embarrassing 3-0 defeat to Chippa United and the club were fined R250 000, with R200 000 suspended after the incident.

Saturday night’s violent scenes were what finally convinced Komphela – who has been continuously called to resign by the fans – that it was time for him to leave.

“What we saw today is not good for football,” said Komphela after the match. “It calls for reflection also from my side. About this club. About the future. If I am the trigger for this (rioting), then maybe one has to maybe step aside…just switch it off,” he added.

Motaung added: “The coach is stepping down with immediate effect.”

Komphela’s stay at the club was never comfortable as calls for his head began just six months after he took the job with fans unhappy with how the team lost out on the first two cup competitions.

The “Steve must fall” banners were a familiar sight at their games especially when they went through a slump.

The 50-year-old goes down as the first coach to go three seasons without winning any trophy at a club known for their penchant for silverware.

A first-half brace by Harris Tchilombou was enough to seal a deserved win for Ea Lla Koto who played with passion and admirable tactical discipline.

The first goal was the quickest scored in this year’s Nedbank Cup as it came after just 45 seconds.
The final is set for Cape Town on May 19.