Mamelodi Sundowns coach Pitso Mosimane has expressed his happiness on the performances of Jeremy Brockie and debutant Siphelele Mkhulise in the team’s Shell Helix Ultra Cup win over Kaizer Chiefs at FNB Stadium on Saturday afternoon. 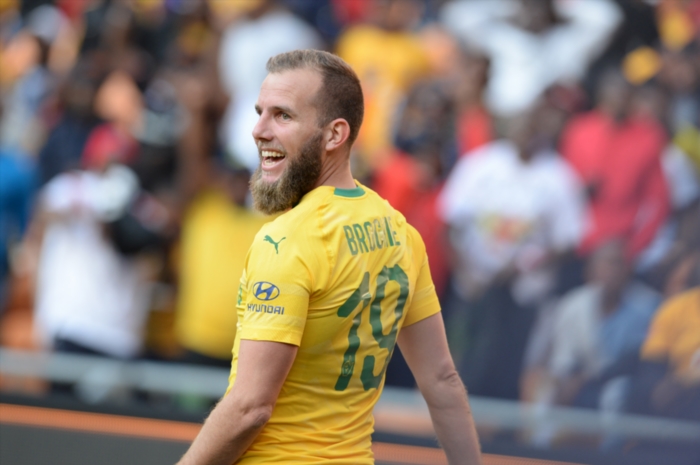 Jeremy Brockie. Pic: Gallo Images
Brockie has been with the Tshwane giants but had not scored until he pounced on a rebound ball in the 53rd minute to give Masandawana the lead against Amakhosi which was his first goal in the coloures of Sundowns.
Mkhulise – a graduate of the Sundowns development academy who spent the last two seasons on loan at National First Division teams Black Leopards and Richards Bay FC – also gave an impressive performance.
“I am happy for Brockie… he broke the duck and worked really hard. He stresses a lot sometimes. On my side I have to get him more time on the pitch,” said Mosimane.
On Mkhulisi he said: “He is a good boy. He has nice touches but he had cramps towards the end because he is not used to this level.”
Mosimane also revealed that there is a 23-year-old attacker he had identified to replace Percy Tau who has joined English Premiership side Brighton and Albion Hove.
“I had Percy and Khama (Billiat) scoring and now I am scraping barrel to try and find a scorer. There is a 23  year old we have our eye on but it might be difficult to get him. He wants to come but when we try to buy a player the price goes up,” said Mosimane without giving away any more information on the player.