Cracks show at Chiefs as Solinas rolls up his sleeves

Solinas will have very little time to patch things up as he has to get the team ready for tonight's Caf Confederation Cup match against Zimamoto of Zanzibar at the Nelson Mandela Bay Stadium. 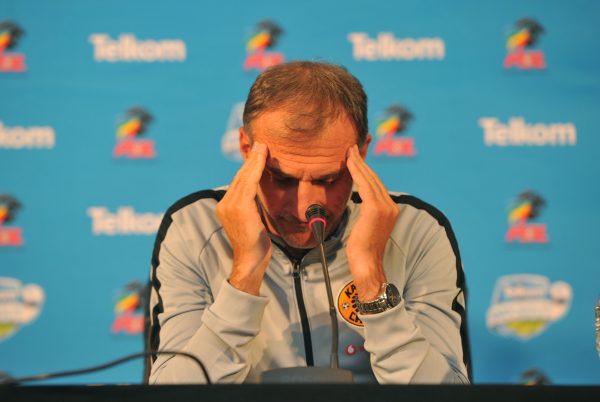 Kaizer Chiefs coach Giovanni Solinas has promised to roll up his sleeves and work hard to get the team right, but he could have more on his hands than he anticipated after his captain Itumeleng Khune had a go at his team-mates, questioning their value to the side after the 2-1 defeat to Orlando Pirates at the weekend.

A visibly shaken Khune uncharacteristically pointed fingers at his own players, blaming them for the shameful third defeat to their bitter rivals in a space of eight months.

His words seemed to suggest that some of the players are not worthy of the famous gold and black Amakhosi colours – a statement which could potentially divide the change-room, leaving the hapless Solinas to try and patch things up.

“We have to look at the performance of the team. If it’s not enough, then I will have to look at myself again and tell the bosses that maybe I don’t deserve to be wearing this badge. We cannot continue losing to Pirates like this – it’s unacceptable, it’s not on,” raged Khune.

“We have to look at ourselves and say, ‘Do we deserve to wear this shirt? Do we deserve to make these people happy?’ If not, then we might as well tell Bobby that this badge is too heavy for us, because some of us are giving our all in every match, but it seems like not all of us are coming to the party.

“So that’s why I am saying we all have to go and look at ourselves as individuals and see what contribution we are bringing to this badge,” he said and also promised to have a man-to-man talk with his team-mates.

Solinas will have very little time to patch things up as he has to get the team ready for tonight’s Caf Confederation Cup match against Zimamoto of Zanzibar at the Nelson Mandela Bay Stadium.

Solinas pledged to never give up as he feels his team can compete for the Confederation Cup, the Nedbank Cup and the Absa Premiership titles.

“I will never give up. I’ll continue to work hard to try and win these trophies. I’ll try to improve the team,” he said after Saturday’s match.