'(We are) trying to bring positiveness in the team and showing them the good things we have done this season,' said City head coach Eric Tinkler. 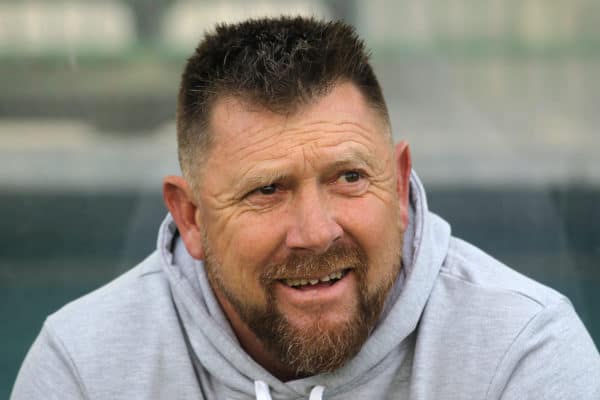 Cape Town City coach Eric Tinkler is hoping his team can give a response to a bad defeat against Stellenbosch. Picture: Shaun Roy/BackpagePix

Cape Town City are on a quest for redemption following their disappointing loss to Stellenbosch FC, but they face a tricky Swallows FC, also looking to bounce back from defeat, in a DStv Premiership tie at the Dobsonvile Stadium on Friday.

ALSO READ: Tembo explains why SuperSport have been switching strikers

The Mother City based club suffered a 3-0 loss to their neighbours in their last league game, while Swallows were thumped 3-0 by SuperSport, which led to head coach Brandon Truter taking a break, so assistant coach Simo Dladla will be in charge of the Birds for the next three games.

Two of those matches will be against Cape Town City, with the sides also meeting in the semifinals of the MTN8, the second leg coming up on Wednesday, also at Dobsonville Stadium, after the first ended in a goalless draw.

“We obviously have a league match with Swallows tomorrow (Friday), and in four to five days time we play them in the MTN8. But this league match is our priority right now. We want to bounce back from the loss against Stellenbosch. It was a disappointing performance, particularly how we conceded goals in areas that we worked on. We are looking to improve our defensive strategy,” said Tinkler.

“And (we are) trying to bring positiveness in the team and showing them the good things we have done this season … we need to replicate that in this game against Swallows.”

Tinkler knows going up against Swallows is going to be a huge challenge, especially with the team’s coach Brandon Truter on a two weeks ‘leave;

“It is going to be tough away from home. There is also a coaching change (at Swallows) as well. So, preparation has been difficult because you don’t know what the new coach is going to bring in. But … we need to get back to winning ways and Swallows stands in our way. We need to go there with a positive mindset, a positive attitude. We need to have a good work rate, good work ethic and try to secure the three points.”

Both teams have had a slow start into the league, having collected four points, but Cape City have only played three games, while Swallows have four matches under their belt – they are sitting in position 10 and 12 respectively.