It was clear from the onset that there is no love lost between the two sides. 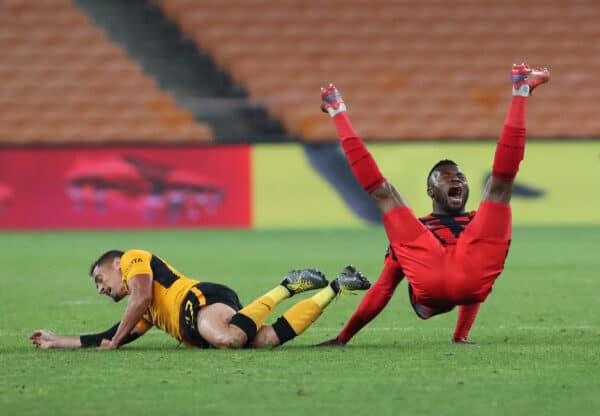 Perhaps seeing the name TS Galaxy now has an effect on Kaizer Chiefs players who just cannot get the better of the Mpumalanga side.

The two sides whose rivalry has grown incredibly over the years played to a goalless draw in a DStv Premiership match at FNB Stadium on Tuesday evening.

Both sides needed the points desperately; with Chiefs wanting to keep as close as possible to Mamelodi Sundowns and Galaxy wanting them to move away from relegation.

A win would have seen Chiefs jump over Royal AM into second place and cutting Sundowns’ lead to 10 points, but the draw sees Sundowns sitting comfortably with a 11 points lead.

Galaxy remain 14th but could be pushed back to 15th on Wednesday should Swallows do the unthinkable and sink Sundowns at Dobsonville Stadium.

It was clear from the onset that there is no love lost between the two sides, and while Galaxy looked the more organised in build-ups, Chiefs had the better attempts at goal.

Chiefs used long balls to try and find Samir Nurkovic up front. He in turn played the ball to Keagan Dolly who had two good attempts in the first 15 minutes.

The Rockets’ first attempt at goal came in the 22nd minute with Augustine Kwem slicing a shot from just outside the Chiefs box. His shot however sailed wide, leaving the Nigerian striker frustrated.

A few minutes after that, Dolly was let down by his first touch after an attempted back pass from Pogiso Sanoka fell kindly for him. But his attempt to control the ball saw it sail away from him and into the hands of Melusi Buthelezi who was quick off his line to close down the angle.

From then Galaxy went on a counter and Lefa Hlongwane came one-one-one with Austin Dube and could not get past the defender who showed some composure to deal with his threat.

Chiefs’  Brandon Petersen was only called to make his first save in the 31st parrying away Orebotse Mongae’s shot as Galaxy started finding their way past the Amakhosi defence.

Moments later, Amakhosi were bailed out by Siyabonga Ngezana who blocked Kwem’s shot.

Dolly did have an effort on target towards the end of the first half but Buthelezi was up to the task and parried it away.

Chiefs came close to opening the scoring early in the second half but Ngezana’s attempted header from a corner deflected off his own shoulder and went over.

Stuart Baxter made a few changes towards the middle of the second half bringing in the more energetic and forward inclined players in Nkosingiphile Ngcobo and Sabelo Radebe, These seemed to work as Amakhosi were then able to string together decent passes going forward and started making threatening runs into the Galaxy box.

Ngcobo came close to grabbing the winner for Chiefs, but his long range shot hit the upright, with Buthelezi well-beaten,

Galaxy were however denied a penalty when Lindokuhle Mbatha was felled by Ramahlwe Mphahlele, but the referee waved play on.