'He is one player who never puts a foot wrong in terms of giving himself to the team,' said the Sundowns co-head coach. 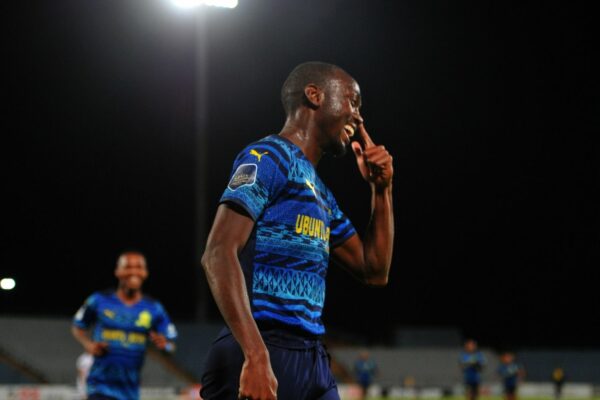 Peter Shalulile is a model professional according to one of his head coaches at Sundowns. Picture: Sydney Mahlangu/Backpagepix.

Peter Shalulile was the first player to take the matchball home this season, after scoring the maiden hat-trick in the DStv Premiership on Wednesday evening in a 4-2 thriller against Swallows FC.

Shalulile took his tally to 18 goals and looks likely to break the 20-goal mark, which has only been achieved four times since 1996, with Siyabonga Nomvethe being the last player to hit 20 goals in the 2011/12 season.

Shalulile’s coach, Manqoba Mngqithi, who has been in the industry for about two decades, rates the Namibian as the “most professional” player he’s seen, and describes him as a beacon of hope for youngsters.

“The most important thing with Peter is that he deserves that reward of scoring goals because he is one of the most professional players that I have ever worked with in my career,” said Mngqithi.

“He is one player who never puts a foot wrong in terms of giving himself to the team … he gives his heart to the team. I am sure that everyone is excited to have a player like him, he is such a good role model. Even when things are not going well for him, he works very hard for the team and that is very important,” said Mngqithi.

Mngqithi is of the view that Shalulile’s form in front of goal makes him one of the best players in the continent, even though he has only scored twice in the Caf Champions League this season.

“Even when we are playing against a small team, he has this mentality that he wants to score and that makes him to have the attributes of some of the top players,” said Mngqithi.