Klopp plays down record-breaking Reds as title looms near

Jurgen Klopp steadfastly refuses to allow Liverpool's long-awaited Premier League title celebrations to start, but the opening month of 2020 has underlined the Reds' mastery over their rivals. 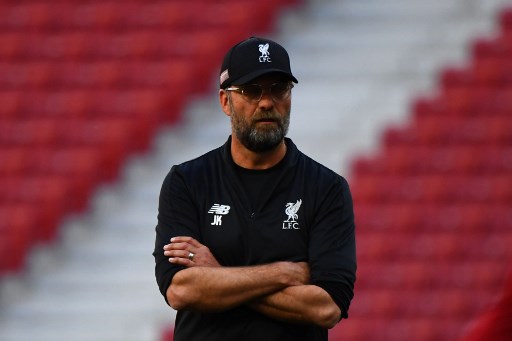 Reds boss Klopp could see his side move an astonishing 22 points clear of their closest rivals and defending champions Manchester City on the opening weekend of February, should they beat Southampton and Pep Guardiola’s team lose at Tottenham 24 hours later.

But the German played down the mounting tally of statistical landmarks after his side became the quickest ever to rack up 70 points in a season following their comfortable 2-0 win at West Ham on Wednesday.

“I’m not too much concerned about records,” he said following Wednesday’s 2-0 win at West Ham.

At the corresponding stage last season, after 24 games, Klopp enjoyed a five-point advantage over Guardiola although February and early March saw his side held to costly draws by West Ham, Manchester United and Everton as they were overhauled by City.

Since that goalless draw with their local rivals Liverpool have dropped just two points in the league, at Manchester United in October.

Southampton visit Anfield on Saturday seeking to become the first club since Leicester, just over a year previously, to take a point from Anfield.

The almost inevitable crowning of Liverpool as England’s best is being eagerly awaited by the club’s supporters given it’s been 30 years since their side were champions of England.

Victory against the Saints would mark a 20th consecutive home league win for the Reds, matching City’s run between 2011 and 2012, and leave them six home wins short of becoming the first club in Premier League history to record a perfect home record.

February could also see Liverpool set a new mark for most consecutive Premier League victories — currently the 18 set by City in 2017.

Liverpool are also within sight of matching one of the game’s most impressive statistical feats; the 49 unbeaten league games amassed by Arsenal’s ‘Invincibles’ of 2003/04.

Klopp’s current 41-game unbeaten run began after defeat against City 12 months back, and Liverpool could reach the 49-game mark against Guardiola’s side on April 4.

Should they continue in their current imperious form, Liverpool are also destined to set a bigger winning margin than even that amassed by the 2017/18 City team.

City won that league title by 19 points, their 100 points leaving them with an 18-point cushion over second-placed Manchester United.

At the current rate of point collection being shown by City and Liverpool, the Merseysiders would end the season 30 points clear of their rivals with a final tally of 111 points.

It would comfortably set a new record for the highest points tally in Premier League history, currently the 100 which City set in 2018.

Such has been their phenomenal effort over the opening 24 games of the campaign that Liverpool now need to win 10 of their remaining 14 fixtures to match that magical 100-point mark.