‘We came here to win,’ says Sheriff captain after shocking Real in Madrid

Sheriff appeared to be hanging on for a draw but instead delivered a knock-out blow. 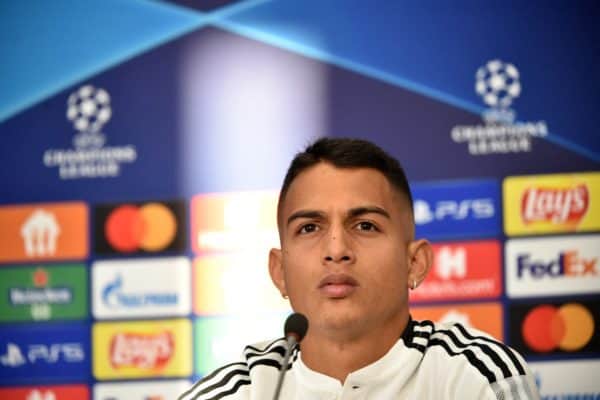 Sheriff Tiraspol pulled off one of the biggest upsets in Champions League history on Tuesday by beating Real Madrid 2-1 at the Santiago Bernabeu, with Sebastien Thill smashing a stunning 89th-minute winner.

“For us this is a dream come true to have won here. We’re so happy, and just enjoying it,” said Frank Castaneda, the Sheriff captain.

“We came here to win,” said the Colombian. “We didn’t just come here to sit around. We know how good our players are and luckily for us Madrid weren’t able to take their chances and we took ours.”

Madrid fell behind to Jasurbek Yakhshiboev’s header in the first half but Karim Benzema’s penalty appeared to have spared the blushes of the Spanish giants, only for Thill to snatch an incredible victory.

“It’s the best and most important goal of my career, that’s for sure!” Thill said.

“The side were so brave with how we played and luckily enough I was able to score a bit of a stunner.”

The result will go down as one of the most surprising in the history of the competition and delivers a significant boost to Sheriff’s chances of qualifying for the last 16.

They have six points out of six in Group D, having already beaten Shakhtar Donetsk.

“This type of game when you have total control is decided by the small details and that has cost us the game,” said Madrid coach Carlo Ancelotti.

“A corner kick, a stupid foul — they cost you and now we talk about a defeat we didn’t deserve.

“We’ve missed out on three points and the group is wide open. We need to win our next game.”

Sheriff, founded in 1997, have dominated Moldovan football but this is their first season in the Champions League group stage.

“We are dreaming of getting into the last 16 and that’s our objective,” said Castaneda. “Our attention now turns to Inter and we’ll work hard in order to ensure we keep getting positive results.”

Thill, Sheriff’s match-winner, was last year playing on loan at Russian club FC Tambov, who in May were dissolved after declaring themselves bankrupt.

“After this match we all went crazy. There are a lot of foreigners in the club, we come from all types of countries. It’s our strength,” Thill, a Luxembourg international, told Canal+.

For Real Madrid it was an unexpected setback for what has otherwise been an encouraging start under Ancelotti.

Real were the more authoritative early on, but Sheriff scored with the first opportunity they got.

Yakhshiboev headed in a perfectly weighted cross from Cristiano.

Madrid improved towards the end of the half but not before Sheriff could have made it two, Thibaut Courtois coming out to clear a ball over the top, only to sidefoot it straight to Frank Castaneda. He fed Yakhshiboev, who curled just wide.

Vinicius chipped past the post for Madrid after a smart dummy by Eden Hazard, who then had a go himself from the angle but his shot was parried away.

The Madrid pressure kept coming in the second half as Vinicius appealed for two penalties in quick succession, the second given after a check from VAR.

Benzema banged in the penalty and carried the ball back to the halfway line but it was Sheriff who had the ball in the net next, Bruno Souza diverting in at the near post, only to see it ruled out for offside.

Luka Modric’s shot hit Giorgos Athanasiadis in the face and the Sheriff goalie then recovered to deny Eder Militao. Athanasiadis was named player of the match.

Sheriff appeared to be hanging on for a draw but instead delivered a knock-out blow. A throw-in was hooked back to the edge of the area, where Thill unleashed a wonderful shot into the top corner.

“Thill’s goal is out of this world. It’s one you dream of. I thanked him at the end of the game,” said Castaneda.