The six-time champion lost control of his bike at 180km at turn seven, sliding across gravel on his left arm and into a barrier. 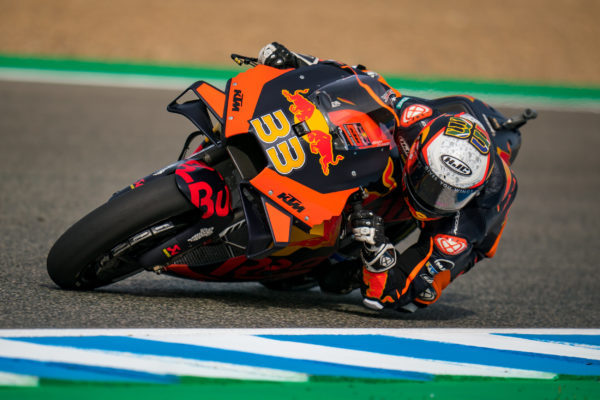 SA's Brad Binder fell heavily in practice in Jerez on Saturday but was able to walk away seemingly unscathed. Picture: Steve Wobser/Getty Images

The Honda rider fell heavily in the third practice session at the circuit where last year he broke his right arm in the opening race to end his 2020 campaign.

Marquez made his comeback after nine months out and multiple bouts of surgery at the Portuguese MotoGP last month.

He admitted to a “lack of strength” after he struggled in Friday practice at Jerez.

In Saturday’s opening practice he lost control of his bike at 180km at turn seven, sliding across gravel on his left arm and into a barrier.

Clearly shaken he managed to walk away. He returned to the pits on a scooter.

After a medical check-up at the track Honda reported the 28-year-old had “no major injuries suffering only a contusion”.

Shortly after in a second tweet the team added: “To double check his condition after the Turn 7 fall, @MarcMarquez93 is heading to hospital for further checks.

“These are precautionary and Marquez is not experiencing any pain or discomfort.”

Marquez finished seventh on an emotional return to the championship in Portugal on April 18 having elected to skip the opening two races of 2021 at Qatar.

At Jerez on Friday he could muster only 16th in the opening two practice sessions.

After the third session Takaaki Nakagami riding for Honda’s satellite LCR team topped the timesheets ahead of championship leader Fabio Quartararo of Yamaha.