It's the third year in a row that South Africa's leading tennis player can't get past the first round of the Australian Open. 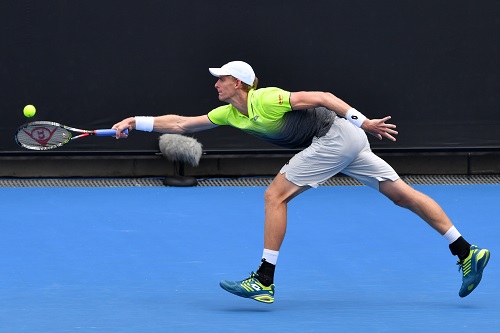 The small South African contingent got off to a wobbly start on Monday, with Kevin Anderson crashing out after a five-set battle in the opening round of the Australian Open.

After getting the upper hand in his first-round match against British player Kyle Edmund, Anderson lost control and was edged out 7-6(4) 3-6 6-3 3-6 4-6 in a tense thriller.

The No 11 seed had been expected to coast through the initial stages, after showing good form by reaching the final of the Maharashtra Open in Pune earlier this month.

It was the third year in a row that Anderson failed to reach the second round at Melbourne Park.

After progressing to the fourth round three seasons in succession between 2013 and 2015, he retired hurt with a knee injury in his first-round match in 2016, and he withdrew ahead of last year’s tournament with a hip injury.

With the big-serving ace sidelined, SA hopes would now rest on doubles specialist Raven Klaasen, the only other South African listed in the main draw.

Klaasen, who reached the Australian Open final with American Eric Butorac in 2014, was set to pair up with new partner Michael Venus of New Zealand, who won the French Open doubles title last season.

The duo enjoyed a solid start to their fledgling partnership last week, reaching the semifinals at the Auckland Open.

Entering the year’s first Grand Slam as the No 8 seeds, Klaasen and Venus were gearing up to meet American Scott Lipsky and Spaniard David Marrero in the opening round later this week.