Titanic Champions Cup clash as GTG and DIA eyeball one another

The 2020/21 horse racing season will never be forgotten and it’s denouement on Saturday has memorable written all over it. 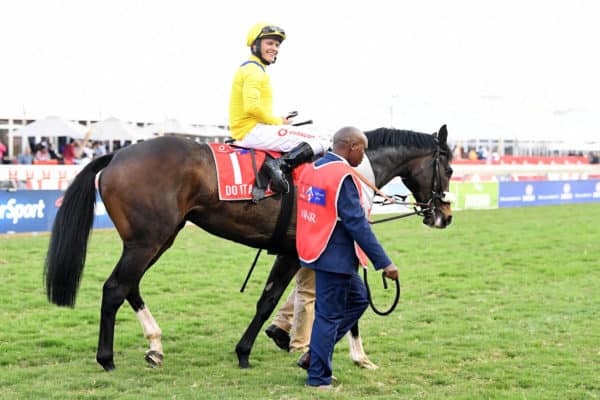 Do It Again, seen here with jockey Richard Fourie on top, will want to make up for missing out at the July. Picture: Anesh Debiky/Gallo Images

The surest bet on the card for Saturday’s Gold Cup race meeting at Greyville is a boxed Exacta in Race 9, bracketing Durban July hard-luck stories Got The Greenlight and Do It Again. Your winning ticket won’t be worth a helluva lot, but the chances of anything beating those two superstars are blowing in the wind.

Easy game? Well, sometimes. Most of the rest of Gold Cup day is far from easy. Owners, trainers and jockeys want to make a mark on such a prestigious and historic day – so the competition is fiery.

The 2020/21 horse racing season will never be forgotten and it’s denouement on Saturday has memorable written all over it, too. Not only does it see the running of the 101st Gold Cup, an eternally popular race on the calendar, it also hosts nine black-type features, including four Grade 1s.

Quirkily, the Marshalls Gold Cup headlines the meeting even though it is nowadays a mere Grade 3 affair – so diminished are the ranks of endurance horses in South Africa (see separate preview).

The most esteemed race on the card is, in fact, the aforementioned “boat race” between Got The Greenlight and Do It Again – the Grade 1 Champions Cup, a weight-for-age contest steeped in history.

Got The Greenlight got up into third place in the Durban July with a thunderous finishing burst on the outside rail – after running into turbulence and being tailed off entering the straight. On the far side of the track, Do It Again slipped into fourth after also finding trouble in the passage.

The latter, of course, is a dual July champion and loves the turf at the Durban city track. The six-year-old could be said to have had a somewhat light preparation for the country’s biggest race and is having his peak run here for new champion trainer Justin Snaith.

Many pundits reckoned Got The Greenlight was also underdone on 3 July, even though trainer Joey Soma wouldn’t hear of it. Whatever, the reality of that, the four-year-old is having his second outing after a rest.

The draw isn’t really a factor and they both have ace pilots on board. It’s a contest to be savoured.

One anticipated memorable moment that won’t be happening is the swansong of the mighty filly Summer Pudding in Race 10, the Grade 2 Kuda Bracelet over 2000m. She was scratched on Friday – along with fellow Highveld raider Wisteria Walk, who also had a few supporters. July runner She’s A Keeper has moved to the top of the betting boards, but Sentbydestiny could be the lurker who takes advantage of the star’s absence.

If the betting is any guide, the Mercury Sprint should be a cakewalk for Snaith’s charge Rio Querari, who has shortened through the week to odds of 8-10. It’s 9-1 bar.

The race might not turn out to be that simple on the day, but Rio Querari does look the best option for a Pick 6 banker.

Trainer Sean Tarry will hand over the champion trainer title to Snaith after this meeting, but will want to go out with a bang, so to speak, and has a number of good chances on the day – particularly early on. One of those is with Rain In Holland in Race 5, the Grade 1 Thekwini Stakes for juvenile fillies. She is going for a fifth win in a row in her sixth start – a form line that’s hard to argue with.

The biggest quibble could come from Tarry’s barn neighbour at Randjesfontein, Mike de Kock, with his filly Bold Act.

9 Do It Again, 4 Got The Greenlight, 5 Catch Twentytwo, 1 Sovereign Spirit