SA might stop getting worse but everyone would love to see it get much better, says Charlie Robertson, global chief economist at Renaissance Capital in the UK. 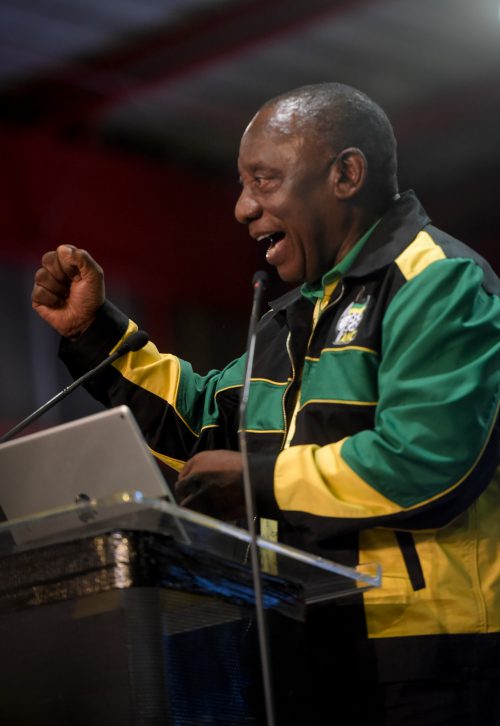 Newly elected President of the ANC Cyril Ramaphosa gives a speech at the closing of the 54th National Elective Conference at Nasrec, Johannesburg, on 21 December 2017. The closing ceremony outlined broad policy approaches of the new leadership, which included expropriating land without compensation, free education and a crackdown on corruption. Picture: Yeshiel Panchia

NASTASSIA ARENDSE:  We are looking at some of the challenges the newly elected president of the ANC, Cyril Ramaphosa, faces. The markets understandably welcome the change within the governing party, inferring that this will boost GDP perhaps an extra 1%. We saw that in the currency reaction.

To talk to us about that is Charlie Robertson from Renaissance Capital in the UK. Charlie, thanks so much for your time.

NASTASSIA ARENDSE:  What did you think? Were you pleasantly surprised, or was it something that you were anticipating – that Cyril might actually get this one?

CHARLIE ROBERTSON:  Our local [people?] for the last couple of months felt that this is a get-it. It was hoped to be 50/50. I’m just relieved that that forecast was right. I think, as we see, the markets were too. You don’t see a value of 15% in a currency in a month, unless it has some quite exceptional news. I think Ramaphosa is that exceptional news for South Africa.

NASTASSIA ARENDSE:  You mentioned some very interesting things. I read your report titled “South Africa: Stopping the deterioration”. What I found quite interesting was South Africa’s ease of doing business ranking; we went from 29th in 2007, when Zuma was elected ANC leader, and now we are sitting at number 82, behind Kenya. That’s fascinating.

CHARLIE ROBERTSON:  That’s changed a little bit as a methodology. There are a couple of sub-categories which they didn’t cover before. But still, the ranking reflects what they were counted at, at the time, and they are suggesting that not necessarily South Africa went backwards – although when you look at the screen, it did go a little bit backwards – but that lots of other countries have asked, “What can we do to make ourselves better?” Countries like Kenya have been trying to address financial inclusion and they’ve made it easier for people to borrow, and South Africa has not made that progress. Zuma’s priorities have not seemed to be about making South Africa a competitive business environment globally.

Also the corruption ranking of South Africa has fallen back as well. So it’s partly yes, there has been no progress and a little bit of backsliding. It’s also been that this is a competitive world and, as everyone else is trying to get ahead, South Africa has not been playing the game.

NASTASSIA ARENDSE:  The one thing you mention as well as Renaissance Capital…when you talk about the institutions, you bring me to a comment by Moody’s. They talk about South Africa’s strong institutions and how they need to be protected; and once you interfere with those institutions, for instance the Reserve Bank, you really are sending the country into that slippery slope where downgrades are imminent. It speaks to the institutions in South Africa, state-owned enterprises, and how strong we’ve made sure that they be.

CHARLIE ROBERTSON:  I think it’s a testament o how strong they are. But you’ve had one party in power for over 20 years already. That tends to lead to problems in other countries. We did a report a few years ago about political longevity, and basically anybody, any party that is in power for more 15 years, eventually starts to attract the sort of people into that party, into the government, who are there for the gains they can make, not for the benefit they can bring to the country. So it’s not a huge surprise that there should have been this pressure. What’s more interesting is that they’ve been able to hold out for as long as they have.

When I said that Ramaphosa is an excellent result for South Africa, it’s only relative to what the markets perceived as the alternative, which was more deterioration. That’s a good statistic further in the ease of doing business, even further on the corruption rankings. And he at least can hold the line. He is not the radical reformer – or at least I’m not convinced yet that he’s a the radical reformer, that he is really going to transform South Africa into a China…story. I don’t see that at the moment. We’ll see [when] he is president of the country and not leader of the ANC.

NASTASSIA ARENDSE:  Here’s something that fascinating that you do mention. Consensus agrees Ramaphosa is a relief for South Africa, but he is unlikely to enact the scale of changes evident in Argentina or Egypt. Please expand on that.

CHARLIE ROBERTSON:  Well, you see in Argentina 15 years of very poor, very business-unfriendly policy from the government, and that metric was selected in 2015 and completely changed the economic equation. In Egypt, which I follow closely, [President] Sisi inherited subsidies that the government paid, costing the country about 8-9% of GDP a year, but [they are] now down to about 3% of GDP a year. He’s been in power four years. He has slashed that subsidy bill for Egypt. So what he is saying is we shouldn’t spend money on subsidies. It didn’t keep Mubarak in power by paying out, let’s say, subsidies on cheap bread. All it actually does is hurt the economy in the long run and doesn’t produce growth. He wants to spend the money that was being wasted on subsidies on investment in infrastructure to make Egypt grow faster to create the jobs that Egypt needs, because their workforce has grown.

South Africa has challenges like that. You’ve got this very high unemployment rate, which most outsiders would say is because the labour market legislation makes it very hard to fire people. And the consequence of that is it makes it very unexciting for companies, and quite scary to hire people, because you might not be able to get rid of them. What if you’ve made a mistake, what if you company can’t expand?

So the weird things is, if you change the labour-market legislation to make it easier to fire people, it will be easier to hire people and that actually helps reduce unemployment. But it’s politically very difficult. And the markets are not sure Ramaphosa is the guy to make that change, given his trade union background.

NASTASSIA ARENDSE:  What do you think of the top leadership now – his other team mates? It’s sort of split between those that the markets, as you say, like and those that they don’t.

CHARLIE ROBERTSON:  I think at least it takes the gloss off the victory. I still think the victory is important, I think it really helps. It just makes the markets more concerned that you are not going to get the big reforms you need. Yes, South Africa might stop getting worse – that’s great. But everyone would love to see it get much better. I think the markets are uncertain with an ANC ticket whether that can happen.

NASTASSIA ARENDSE:  Well, we’ve got 18 months until the next election in 2019, so we’ll see what he can pull out of the hat and whether he’ll be able to help the ANC get those numbers that do need.

Thanks for your time today.