Claims of discrimination against black FNB customers heads to court

More than 4 000 bank customers claim they were charged 30% more than whites on mortgage loans. FNB will have to prove that it did not discriminate between its ‘low-cost’ and ‘high-cost’ housing mortgage loan clients. Picture: Moneyweb

Cape Town-based usury expert Emerald van Zyl has waged a nearly 10-year fight against banking abuse. This time he is asking the Cape Equality Court to rule that FNB’s FirstRand Finance Company discriminated against more than 4 000 black customers by charging them 30-40% more than white customers on their mortgage loans. The total claim is likely to exceed R3 billion.

The claim relates to mortgage clients of the former Saambou Bank, later taken over by FNB. Though this case involves FNB clients, Van Zyl says he has substantial evidence of discrimination by other banks. 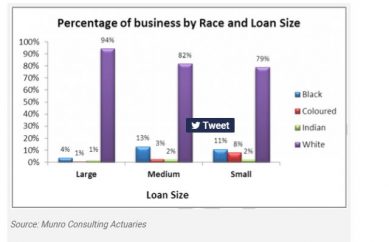 Van Zyl’s case was dismissed with costs six years ago in the Pretoria High Court, which found no evidence of racism by the bank, but Van Zyl says the judgment is flawed in several respects. For one thing, racism was not part of his pleadings in that case. He was looking for financial relief for seven FNB customers, who happened to be black, on the grounds that the bank exceeded the allowable interest rate in terms of the Usury Act. The judge ruled otherwise, declaring the interest rates charged “reasonable”.

This time Van Zyl wants the Equality Court, where the burden will be on FNB to prove that it did not discriminate, to hear the case.

In 2005 he appeared on Carte Blanche accusing the bank of overcharging interest on thousands of mortgage loans – and he was proven right. FNB subsequently admitted the overcharge and refunded customers R154 million. In that case, the bank had charged double interest in the first month of the loan, which causes the bond to be in arrears from day one.

The charging of so-called ‘interest in advance’ is illegal in terms of the Usury Act and can result in jail time for offenders. As far back as 1990, the South African Reserve Bank (Sarb) warned banks to stop the practice, but Van Zyl claims Saambou carried on regardless. In 2002 there was a run on Saambou and the Sarb scrambled to rescue the bank before things got further out of hand. It was at this point that FNB acquired R8 billion worth of Saambou mortgages, of which R2.6 billion was for low-cost housing.

In about 2010, Van Zyl was handed a leaked Saambou customer database by a former bank employee. It showed roughly 80 000 customer accounts of which 23 000 were low-cost housing clients. Further investigation by retired university professor of sociology Cornie Groenewald estimated that 99% of these low-cost housing units were black-owned. Van Zyl reconstructed the accounts of these customers and found they were being charged as much as 30% or more than ‘high-cost housing’ customers.

FNB has refuted the charges of discrimination, in part because there is no reference to the race of customers in the Saambou database acquired by Van Zyl. But Groenewald’s research suggests otherwise. The ‘low-cost housing’ units referred to in the database qualify for government subsidies, for which the recipient must be black and earn below certain income thresholds.

Van Zyl says any reference to ‘low-cost’ and ‘high-cost’ housing in Saambou’s internal documents is effectively code for black and white customers. The discrimination is claimed to have started in 1998, four years before Saambou collapsed and was bought by FNB.

Van Zyl lodged a complaint with the SA Human Rights Commission over one FNB customer, Simon Michaels of Mitchells Plain in the Cape, who took out a 20-year mortgage loan for R64 000 in 1996. After 21 years, his outstanding balance was R77 000. This was the result of discrimination, says Van Zyl’s complaint.

In his affidavit before the Equality Court, Van Zyl presents evidence that “high-cost housing” (white) customers would benefit from a drop in interest rates, but not “low-cost” (black) customers with a mortgage loan less than R220 000. The interest rates charged to several black customers cited in his affidavit were kept at the old, higher rate even though the prime lending rate had dropped for all other customers.

An expert report by Munro Consulting Actuaries analysed 75 000 loan agreements, 58% owned by whites, 1% by Indians, 10% coloureds and 31% blacks. It found that white clients with large loans (above R150 000) pay on average 1.1% below prime, while black and coloured clients pay 0.45% below prime. But on small loans (less than R100 000), white clients were paying 0.75% above prime and black and coloured clients 2% above prime. 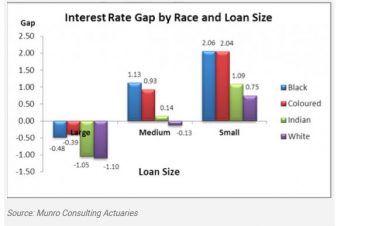 Breaking it down further to suburbs, the report shows the southern suburbs in Cape Town have the lowest interest charged, followed by Stellenbosch. Kroonstad and Bloemfontein clients are charged the highest interest rates in the sample examined, though the sample size at suburban levels becomes sparse. “We note that these samples are mostly not large enough to give statistically reliable results, but they do confirm that even within the suburbs, race has a noticeable effect on the interest rate gap,” says the Munro report.

In the Pretoria High Court case heard six years ago, Van Zyl says he was unable to rebut the testimony of an FNB witness because he was taken ill during the hearing and had to have emergency surgery. In the Equality Court in August this year, Andrew Strachan of Norton Rose Fulbright, deposing for the bank, argued that it could not have been guilty of discrimination prior to June 2003, when the Promotion of Equality and Prevention of Unfair Discrimination Act came into effect. The Equality Court’s Judge Fortuin advised Van Zyl to amend his pleadings to reflect the fact that the court’s jurisdiction only came into effect in 2003. The case will likely be heard in the Equality Court in the New Year.

Van Zyl says in the Pretoria case that the relief sought was financial recompense for the seven clients, who happened to be black. There was no claim of discrimination. Van Zyl’s affidavit now before the Equality Court claims the bank at various times violated the Usury Act in respect of 4 000 customers by charging higher than the allowable interest rate.

He argues the discriminatory practices go back to 1990 when parliament passed an amendment to the Usury Act to prevent discrimination against low-cost housing customers. The banks lobbied against this on the grounds that low-cost housing was higher risk and therefore required a higher interest rate. As a compromise, banks were allowed to charge a R5 a month ‘admin’ fee, which was subsequently bumped up to R50 a month when the National Credit Act came into force in 2007. “The purpose of this fee was that low-cost housing would be charged the same interest rate as clients of high-cost housing,” says Van Zyl.

Judge AJ Vorster of the Pretoria High Court found that the cessions giving Van Zyl the right to approach the court for interest rate relief were “bad in law and of no force or effect”.

The judge was scornful of Van Zyl’s ongoing media campaign characterising Saambou and its successor as racist. “During cross-examination of the Plaintiff (Van Zyl) it appeared that his conclusion that black people were charged higher interest rates than white people is completely unfounded.”

This is thought to be the first time the Equality Court has heard a case alleging discrimination by a bank.