It’s plain to see just how aggressive the challenger operator is being. 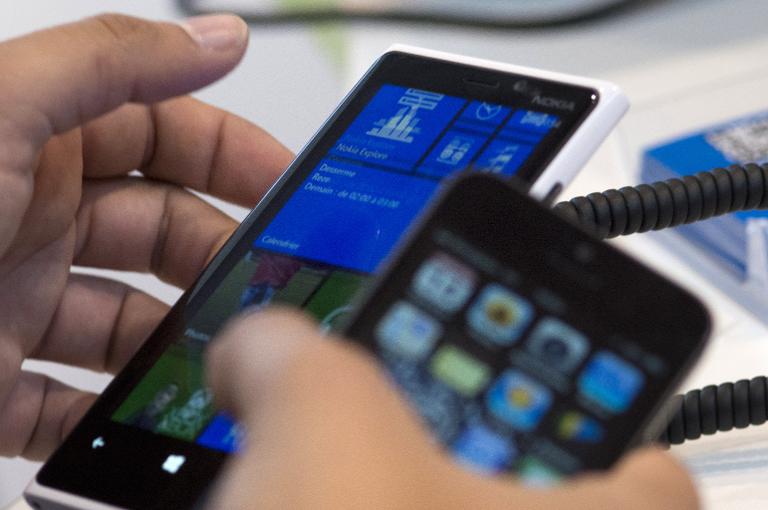 Telkom is betting its FreeMe packages, announced on Thursday night and available from Monday, will shake up the South African mobile market. And when they’re compared side-by-side with similar offers from rivals, it’s hard to see how they won’t.

(Read more: Inside Telkom’s bold plan to turn the mobile market on its head).

For the purposes of this comparison, data-focused smartphone packages were used (at the SIM-only price, i.e. without a handset/device). Both Vodacom and MTN have launched adapted versions of existing ‘base’ plans to include more data in recent months, and in the former’s case, the Smart and Red plans were used, while in the latter’s, My MTNChoice+. Cell C released a separate range of contracts, Pinnacle, in February to target this segment. 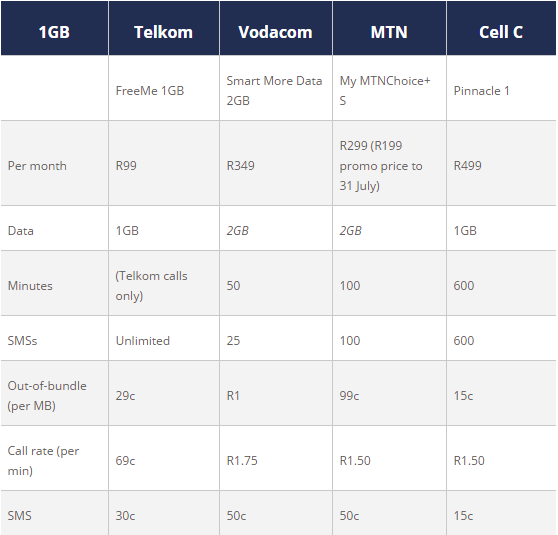 Both Vodacom and MTN don’t actually have 1GB integrated packages aimed at real entry-level usage (1GB per month is very low, comparatively). They might both sell you a contract that requires a data bundle to be bolted on, but that defeats the purpose, especially since 1GB of data will cost you about R150 (as you’ll see in the following example). Cell C’s ‘comparable’ plan, Pinnacle 1, is five times pricier than Telkom FreeMe 1GB. Sure, it comes bundled with 600 minutes, but consumers increasingly don’t want this. 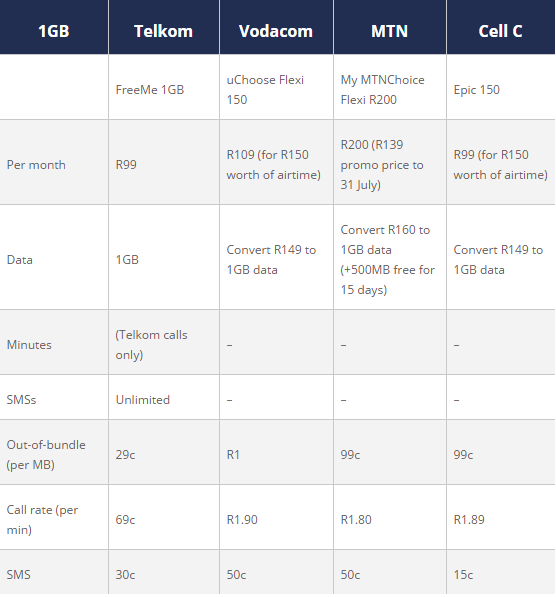 One way to get a slightly better comparison – at the entry-level, at least – is to compare Telkom FreeMe 1GB with Top-Up contracts on offer from the other three operators. Here, a ‘bonus’ amount of airtime is on offer for a flat monthly fee. For example, on Vodacom uChoose Flexi 150, you’ll pay R109 per month for R150 worth of airtime. To get 1GB of data, you’ll need to convert this airtime into a data bundle each month. But the average customer, especially the average contract one, is not going to want to jump through this many hoops each month just to get data. Plus, because these are top-ups, you’ll need additional airtime to make calls.

I’ve deliberately included this comparison, as it shows what’s possible with a clever repackaging of existing offers, bundles and services from the three larger operators. 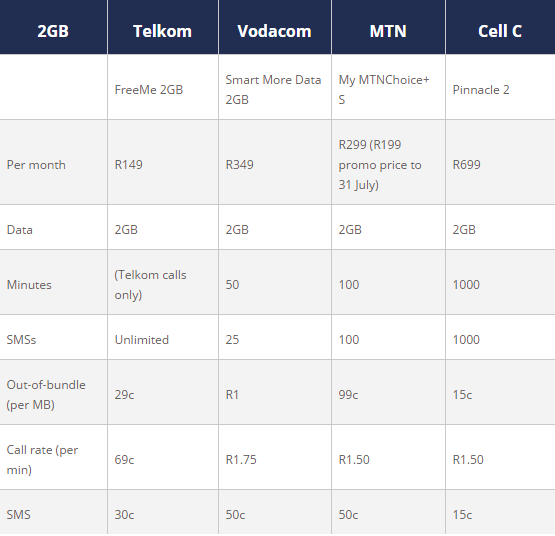 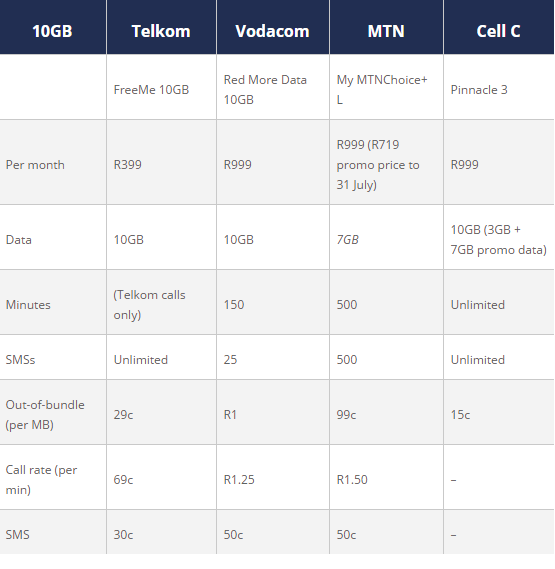 You’d be hard-pressed to use more than 10GB of mobile data a month, unless you don’t have Wi-Fi access at either home or work (for data intensive tasks like software and app updates). Telkom Free Me 10GB is 60% cheaper than its rivals (although a similar product from MTN is currently on promotion). In truth, however, MTN’s My MTNChoice+ L isn’t comparable, as it offers just 7GB of bundled data. Cell C’s Pinnacle 3 contract blurs completely into its Infinity Select one (same price for effectively the same service).

One thing you may not have noticed is just how competitive Telkom’s out-of-bundle rates are when viewed side-by-side across these various packages. Only Cell C comes close, pipping Telkom on out-of-bundle data pricing (an arguably irrelevant achievement given how much pricier Cell C’s packages are). Telkom’s FreeMe call-rate – 69c per minute – is roughly half the price of its rivals across most comparisons (44% to 63% cheaper), but because off-network minutes (i.e. to other operators) aren’t bundled in four out of the six FreeMe plans, you’ll likely need to factor in an additional monthly amount for the calls you do make. 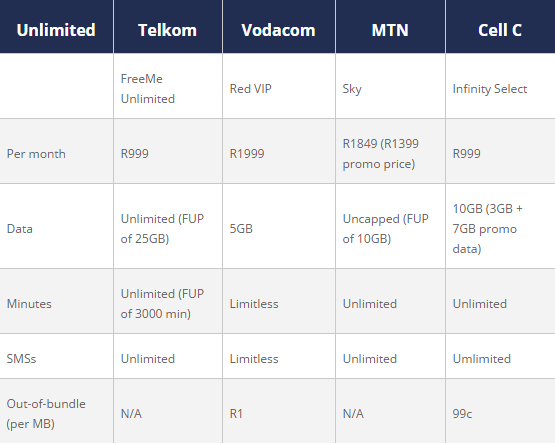 At the very high end, Telkom’s FreeMe Unlimited plan is by far the most attractive. Its half the price of market leader Vodacom’s Red VIP, and 46% cheaper than MTN’s non-promotional price for its Sky product. Only Cell C’s Infinity Select compares favourably on price, but with only 10GB of bundled data (of which 7GB is promotional), you’d honestly be better off buying its Pinnacle 3 package. The data comparison here is almost laughable, with Vodacom including a pitiful 5GB on a ‘limitless’ contract. MTN describes its bundled data as ‘uncapped’, but a fair use policy (FUP) of 10GB is in place. Contrast this with Telkom’s 25GB FUP.

Granted, in most of these cases we’re not quite comparing apples with apples as Telkom’s three larger rivals will argue that their packages are bundled with (significantly more) free minutes. But that’s the whole point, isn’t it? The market’s moving on from voice and consumers are paying for stuff they simply don’t need (or use)!

Just how much are Telkom’s three larger rivals willing to cannibalise their postpaid bases with (obviously) less profitable data-focused packages? The real question is: can they afford to do nothing?