Sasria already gearing up to pay out protest-related claims

While people watch the rioting and looting on their screens, many wonder who will pay for all the damage and loss. 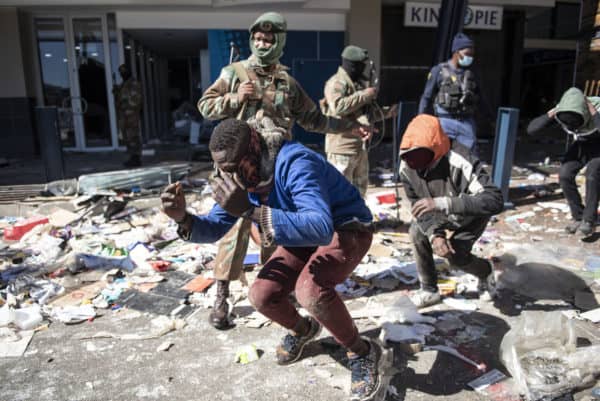 Members of the SANDF and SAPS arrest looters at Jabulani Mall in Soweto, 13 July 2021. Shopping centres, malls, and stores have been looted across Gauteng and KwaZulu-Natal for a number of days, allegedly linked to former president Jacob Zuma's imprisonment. Picture: Michel Bega

Sasria insurance will cover all legitimate claims from clients for riot and looting damage and has already included events such as this in its planning for 2021. The government-owned insurer paid out R1,7 billion on claims after trucks were burned a few months ago and R470 million for the damage caused during the Fees Must Fall protests.

Fareedah Benjamin, executive manager for insurance operations, said on Tuesday that it has already appointed claims adjusters to start looking at the situation on the ground.

“It is too early to estimate the amount of the damage, but our clients must not panic. The damage must still be validated and we are not disputing the merits of the incidents.”

The damage and losses during protests and riots are not usually covered by short term insurers, but these insurers give their clients the opportunity to add Sasria insurance to insure your possessions against damage during civil unrest, public disorder, strikes, riots and terrorism.

ALSO READ: Sasria will cover burned trucks if they were insured against civil unrest, public disorder, strikes, riots and terrorism

This insurance is available for any individual, business, government institution or corporate entity with assets in South Africa. Sasria received over 16 000 claims over the past five years, to the value of over R4.6 billion.

Sasria was established in 1979 to offer special risk insurance to individuals, government and businesses and offers cover such as:

Sasria cover can only be added to existing insurance policies and not taken out separately.

Ricardo Coetzee, head of Auto & General Insurance, is urging car owners to check with their insurers that Sasria cover is included in their policies, as it is not automatically included if your car is paid off.  He gives the following advice for people who drive during this time of unrest: