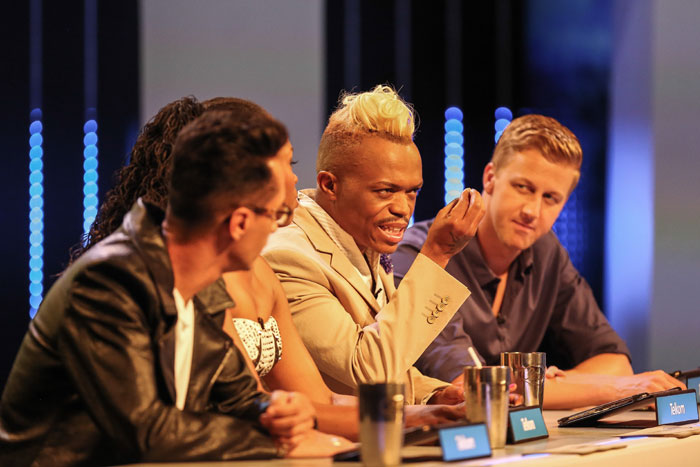 New judge Somizi Mhlongo took his seat on the judging panel, alongside Randall Abrahams, Unathi Msengana and Gareth Cliff, and host ProVerb supporting the wannabe stars in the wings.

From the very first note, this year’s first countrywide auditions at the State Theatre in Pretoria signalled the start of yet another smashing season featuring only the best entertainers – whether they wowed the judges or put themselves in the run for the notorious Wooden Mic award. In the end, 19 talented singers received that all-important Golden Ticket to the next round – the Theatre Phase at Sun City.

22-year-old Ora Kola from Winterveld, who already boasted credible showbiz experience as a backup singer for Mzansi superstar Zola, was the first contestant to give future stardom a go. The judges were unanimously impressed with Ora’s deep, masculine voice, but his lack of excitement at winning a Golden Ticket was a concern, so Somizi demonstrated how Golden Ticket joy should be expressed.

Unathi was moved to tears by the powerful performance of the shy, humble Rhema Varrie, who at age 20 is the sole breadwinner of his extended family in Alberton. “You look and sound like an Idol,” Somizi agreed, and Rhema walked away with four Golden Ticket votes. Another male singer who got four nods was Thami Shobebe, 27, who plays the bagpipes and joined the military to secure a better future for his sisters.

One contestant in particular was under considerable pressure in the long Idols SA audition queue. As the son of South African musical legend Ringo Madlingozi, Phila Madlingozi from Johannesburg is already a seasoned performer and familiar face at age 25. He has starred in drama series like Intersexions and Mutual Friends. But now “it is time for Phila to stand on his own two feet and support himself and be his own man,” says his dad. Which he promptly did by winning over three out of the four judges and getting his pass to Theatre Week.

Who Wore it Best: Sanele's jacket may have cost R3 000, but is Eric giving him a run for his money? #IdolsSA pic.twitter.com/ddnjC3ud2R

"The problem in our country, there are very few good songwriters, so therefore people who are average sound good." Randall ???? #IdolsSA

Yo ! I feel sorry for Randal's kids ! That man can punish you with words alone,no need for a smack ! #IdolsSA he is generous with the truth!

Okay… Let me say it. Talent may at times skip a generation. And it's okay. #IdolsSA

Ringo Madlingozi is not quite the same without that gap. I love and miss it. Aaah nostalgia #IdolsSA

Thami gets a “Yes” from all four judges. This is how he did it: http://t.co/bnSzhdRfoF #IdolsSA pic.twitter.com/FCYO6FXHnU