A Royal Night Out review

Never let the truth interfere with a good story as is in A royal night out. 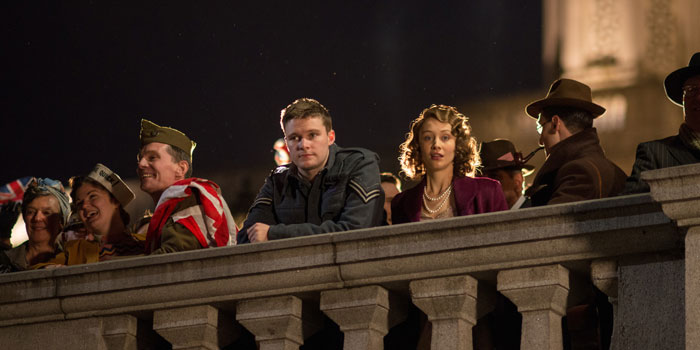 This little piece of wisdom is sometimes used by journalists who add some extra chillies to a story that has the potential to be a headline grabber, but lacks a little bit of oomph. This film is loosely based on the truth and I am sure Queen Elizabeth will not be amused when she finally catches up with it. Or perhaps she may sigh: “That wasn’t the way it was, but it certainly should have been so!”

The (supposed) truth is that during VE Day in 1945, when peace was declared throughout Europe, Princess Elizabeth and her more wayward sister, Princess Margaret, were allowed to mingle with the masses in London celebrating peace after six years of the terrors of war. Like Audrey Hepburn in Roman Holiday, a princess set to reign has a rare chance to experience her people on the streets. She can mix with them before they bow and curtsy as she sees them without their well-behaved garden party masks on.

This is also one of the rare chances she has of simply being a normal person who can talk to the ordinary person in the street, watch them as they listen to her father’s speech and see what really matters to them. Perhaps some of our fat-cat politicians should do the same.

And this is where the fantasy and fictional elements creep in. The young and vulnerable, but steadfast, Elizabeth meets a handsome stranger, simply referred to as “Jack”, charmingly embodied by the handsome Jack Reynor. And, dare one suggest, she feels butterflies in her stomach. Prince Phillip is conveniently still stationed “somewhere” overseas.

This forms the heart of a delightful fantasy in which we witness the queen push her sister in a wheelbarrow to Windsor Castle. Whether this actually happened is open for discussion. An excellent cast enjoy their roles with unadulterated joy and the script writer obviously had free rein and used his imagination to the full. To see the two princesses dancing joyfully together before their royal duties turns them into different people and forms part of the film’s immense charm.

Many people might shrug the idea off as bollocks, or frivolous showbiz. But in a country where bad news doesn’t even make the headlines any more because there are too many corruption stories or articles about gross incompetence, it is reassuring to witness a world that went crazy, but got to the brink of realising its potential. It is also great to see monarchs, past and present, having fun and even smiling – watch Emily Watson as her queen’s upper lip loses its stiffness momentarily in the end.

If you want to forget about your troubles and disappear into a royalist soapie, you might enjoy this. Sarah Gadon is perfect as the young princess Elizabeth and Bel Powley is hilarious, yet lovable, as her sister, Margaret. Rupert Everett misses the mark as King George. After Colin Firth’s interpretation in The King’s Speech, his acting never rings true.

The four-star rating is purely because the film is so highly entertaining. This might be the only review to rave about the film. But if you want to have fun, see it. Get yourself a latte, leave the bad news outside and give yourself over to a jubilant celebration of life before the crueller side of South African reality sets in again.