Khumba might more appropriately be named The Lion King With Zebras. When little Khumba (Austin) is born with only half his stripes, he is rejected by the superstitious herd who blame him for the sudden drought affecting the Great Karoo. 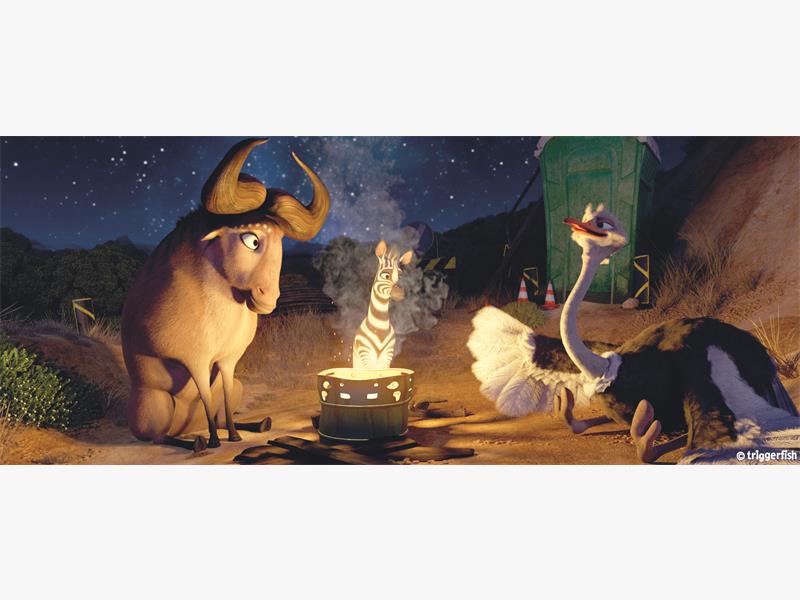 The outcast zebra leaves the confines of the land, venturing into new territory in search of greener pastures. He is rescued by a quirky duo: a wildebeest, Mama V (Lorette Devine), and an ostrich, Bradley (Richard E. Grant) who fill the Timon and Pumba roles after being attacked by a wild dog.

The three begin their journey together across the Karoo in search of a magical waterhole, which according to a mystical mantis (Adrian Rhodes) – think of The Lion King’s Rafiki – will afford Khumba his stripes, once crossed. They meet a host of weird and wonderful animals along the way, including a migrating herd of springbok (Rob van Vuuren, Nik Rabinowitz, Matthew Dylan Roberts) with exaggerated Afrikaans accents and strong South African humour.

Familiarities aside, this 3D South African animation, made by Triggerfish Animation Studios, is altogether well-produced and enjoyable. The characters are well-established, clever and cunning. With its engaging plot, Khumba takes viewers on an adventure, suitable for both young and old.

With a wide range of voices, including Hollywood greats, Liam Neeson as Phango the Leopard, Steve Buscemi as Skalk the wild dog and Catherine Tate as Nora the Merino sheep, the film offers an all-inclusive global celebration of ethnicity. This plays well with the central theme of being proud of your individuality and teaches the beauty of differences among people, or in this case, animals. Khumba realises that diversity is essential for survival and that difference can, in fact, be strengths.

Khumba was selected at the Toronto International Film Festival and sold to three powerhouse distributors, an outstanding achievement for its South African filmmakers. In another first for the local industry, the film will also be released in Afrikaans, lending itself to wider range of audiences.

Triggerfish, who also created the film Zambezia, have raised their standard and there is no doubt that they will break away from the established conventions of more renowned players such as Pixar to establish their own distinctive voice in the future.